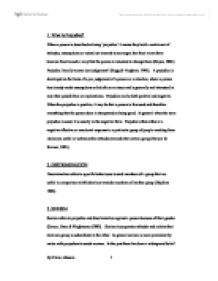 A report on prejudice and discrimination towards sexism

1. What is Prejudice? When a person is described as being 'prejudice' it means they hold a certain set of attitudes, assumptions or mental set towards some target, that their views have become fixed in such a way that the person is reluctant to change them (Hayes, 1994). Prejudice literally means 'pre-judgement' (Hogg & Vaugham, 1995). A prejudice is developed on the basis of a pre-judgement of a person or a situation, where a person has already made assumptions or beliefs on an issue and is generally not interested in any other possibilities or explanations. Prejudice can be both positive and negative. When the prejudice is positive, it may be that a person is favoured and therefore everything that the person does is interpreted as being good. In general when the term prejudice is used, it is usually in the negative form. Prejudice often refers to a negative affective or emotional response to a particular group of people resulting from intolerant, unfair or unfavourable attitudes towards that certain group (Brewer & Kramer, 1985). 2. DISCRIMINATION Discrimination refers to specific behaviours toward members of a group that are unfair in comparison with behaviour towards members of another group (Hopkins 1996). ...read more.

For girls these barriers are particularly significant as they hinder types of paid work which is regarded and financially rewarded as 'skilled' (Pilcher, 1999). Although schools have tried to make the options of subjects equal for both sexes, there are a multitude of other contributing factors that influence a girl's own immediate gender concept. The ways in which both boys and girls, and men and women are viewed in a certain society, the roles they are expected to play, the attitudes and behaviour they are expected to portray, will all affect a child's knowledge and understanding of what is acceptable gender behaviour. Such discrimination creates gender differences in personality development through adolescence (Cohn, 1991) and perpetuates gender-role stereotypes (Eagly 1987). One of the most powerful forces in the transmission and maintenance of traditional sex stereotyping is the media (Hogg & Vaughan, 1995). Women are often seen as the home makers, advertising many household appliances and products, whereas men advertise more outdoor, active products. Women are often used for decorative purposes in the media, sending out the impression that all there is to many women is beauty but no brain. 6. ...read more.

However there is evidence to suggest that there can be sudden and dramatic changes in people's attitudes. 9. Conclusion Women today are still facing many prejudices and are still being discriminated against because of their sex. Although things have improved for women since the implementation of the Sex Discrimination Act and the Equal Pay Act, it takes more than a passive and legal demonstration of this, to counter the strength of many traditional beliefs which are more acceptably reinforced. Self-ideologies rest on deeper sources. Women today have two recognised roles, one at home and the other in the workforce. Due to biological reasons many women will always have these two recognised roles. Marriage, childbirth and childcare can all reduce a women's economic activity. With traditional beliefs now changing, particularly for women, many women are no longer happy settling for motherhood and being a housewife. As long as stereotypes are apparent in society, prejudices on the basis of a person's sex shall always occur. Although most people consider prejudice as being wrong, most people automatically make pre judgements about another person at some point in their lives. Many people also experience prejudice against them at some point of their lives as well. Although prejudice in many societies is considered as socially unaccepted sadly it is a part of life. ...read more.