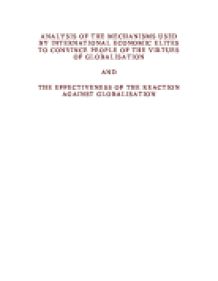 ANALYSIS OF THE MECHANISMS USED BY INTERNATIONAL ECONOMIC ELITES TO CONVINCE PEOPLE OF THE VIRTUES OF GLOBALISATION AND THE EFFECTIVENESS OF THE REACTION AGAINST GLOBALISATION I- Analyze the mechanisms used by international economic elites to convince people of the virtues of globalization. In my essay paper I will introduce the global elite class defining their structure and the way this organization functions. The representatives of this powerful social and economic group make serious decisions in a secret context. Apart from the world minority, the global system seems to work on their pre-planned scheme. However this type of system requires a lot of instruments and tools for the governance of the 99per cent of the rest of citizens. These tools are very well known and form in the global capitalist society a life routine. I specify the Bank institutions and the Mass Media. Both of them have unreachable power to control people, lifestyles, countries and continents. We all heard about the term elite that in general use refers to a selected group of persons with intellectual dots as well as wealthy that adopts powerful and dominated positions my means of premeditated and selected behavior. Our light-speed, globally connected economy has led to the rise of new super-elite that consists, to a notable degree, of first- and second-generation wealth. Its members are hardworking, highly educated, jet-setting meritocrats who feel they are the deserving winners of a tough, worldwide economic competition-and many of them, as a result, have an ambivalent attitude toward those of us who didn't succeed so spectacularly. ...read more.

Responsible borrowing to a very large extent is what drives the economy. The countries borrow credit for various purposes, but mostly to provide goods and services to the people. Companies borrow for various reasons, and basic economic theory attests to the fact that companies prefer a regime of low borrowing costs so that they can expand productive capacity. Debt is the main form of finance used worldwide. In a capitalist society debt has been greatly normalized, with financial institutions being in the business of marketing debt. "The modern banking system manufactures money out of nothing. The process is perhaps the most astounding piece of sleight of hand that was ever invented ... Bankers own the earth. Take it away from them, but leave them the power to create money, and with a flick of the pen they will create enough money to buy it back again ... if you want to continue to be slaves of the bankers and pay the cost of your own slavery, then let bankers continue to create money and control credit." - Sir Josiah Stamp, Head Of The Bank of England, 1781. The monetary and financial policies as complement, not replace, structural solutions, and lead to monetary stability and lower interest rates to stimulate investment in the productive sectors and services, while it would take measures to encourage the use long-term credit. However the credit system : the less-wondrous inventions, particularly the explosion of subprime credit helped mask the rise of income inequality for many of those whose earnings were stagnant. ...read more.

In conclusion, it is very difficult to give any opinion about the effectiveness of the reaction against the globalization because there is a delicate political and economical situation over the world. The global crisis take make the scenario take different views very often. Many countries are waiting for the following decision of the World Bank, World Trade Organization, and the International Monetary Fund. However, the last couple of years a serious rage of world protest, campaign, demonstration and occupying are taking place. Africa, Europe, America and in some parts of Asia people are becoming more conscious of the lack in the present system and start fighting pacifically in order to appeal for a democratic change. The result of such massive activism is momentary uncertain as it is uncertain for the political system. REFERENCE 1.Thompson, Peter (1980). "Bilderberg y Occident" . South End Press . p. 158. 2.Bilderberg Meeting Of the 1997 Assembles, PR Newswire, News Release, June 13,1997 http://www.prnewswire.de/cgi/release?id=42594 3. Korten David C., The corporations rule the world, 2nd edition 2001 4. Downing, John, ed (2004), The SAGE Handbook of Media Studies, SAGE. p. 296. BIBLIOGRAFY -Ronaldo Munck, "Globalization and Contestation", 2007 -Strohschineider T, "The euro debt crisis must force a re-evaluation of capitalism" The Guardian, October 3,2011 http://www.guardian.co.uk/commentisfree/2011/oct/03/germany-euro-debt-crisis -Inside the secretive of the Bilderberg Group, BBC news September 29, 2005 -The rise of the new global elite, Freeland C, The Atlancic Februaty 2011 -http://www.theatlantic.com/magazine/archive/2011/01/the-rise-of-the-new-global-elite/8343/7/ ?? ?? ?? ?? ...read more.