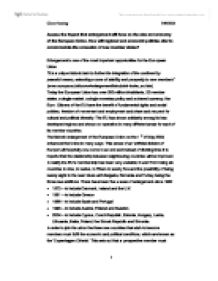 Assess the impact that enlargement will have on the size and economy of the European Union. How will regional and economic policies alter to accommodate the accession of new member states?

Assess the impact that enlargement will have on the size and economy of the European Union. How will regional and economic policies alter to accommodate the accession of new member states? Enlargement is one of the most important opportunities for the European Union. "It is a unique historic task to further the integration of the continent by peaceful means, extending a zone of stability and prosperity to new members" (www.europa.eu.int/comm/enlargement/intro/print-index_en.htm) Today the European Union has over 500 million inhabitants, 25 member states, a single market, a single monetary policy and a shared currency; the Euro. Citizens of the EU have the benefit of fundamental rights and social policies, freedom of movement and employment and share and respect for cultural and political diversity. The EU has shown solidarity among its less developed regions and shown co-operation in many different areas for each of its member countries. The historic enlargement of the European Union on the 1st of May 2004 enhanced the Union in many ways. This sense of an 'artificial division of Europe' will hopefully now come to an end and instead of dividing lines it is hopeful that the relationship between neighbouring countries will be improved. In reality the EU's membership has been very unstable; it went from being six countries to nine, to twelve, to fifteen to twenty five and the possibility of being twenty eight in the near future with Bulgaria, Romania and Turkey being the three new additions. ...read more.

Enlargement will boost co - operation between present member states in helping with issues such as crime, drug trafficking and people smuggling 6. The prospect of enlargement has already made a real difference to the political stability and international security in central and Eastern Europe and the Eastern Mediterranean 7. The new member states have made major improvements in air and water quality to meet EU standards. This will result in the reduction of cross border pollution 8. The EU as a whole body will now have a louder voice in the world with a population of 450 million. This should be of benefit in such things as international negotiations. 9. To be part of the EU the criteria demands stable institutions that guarantee human rights, democracy, rule of law and respect for and protection of minorities. This improves and maintains the standard of living for many citizens across Europe, as each country will alter their practices and legislation to the EU standards. 10. Enlargement prompted the Agenda 2000 package of internal policy reforms agreed at the Berlin European Council in 1999 and also the institutional reforms agreed at the Nice European Council in December 2000. It will continue like this and aim to improve the effectiveness and transparency of the EU. ...read more.

Solidarity and cohesion and the main two values that underlay regional policy in the EU - solidarity because the policy aims to benefit citizens and also regions that are economically and socially deprived compared to EU averages and cohesion because there are positive benefits for all in narrowing the gaps of income and wealth between the poorer countries and regions and those that are better off. "The Unions environment is changing fast, both internally and externally. It must set about adapting, developing and reforming itself. Enlargement represents a historic turning point for Europe, an opportunity which it must seize for the sake of its security, its economy, its culture and its status in the world" Jacques Santer, President of the commission, Strasbourg, 16th July 1997 (Avery & Cameron 2001 p 175) In conclusion, I feel that enlargement, overall, will have a major impact on both the size and economy of the European Union. Although the EU will become a larger trading block, of approximately 500 million people, the relatively underdeveloped nature of the new member states' economies will mean that the impact on trade will be felt in the medium and long term rather than short term. The alteration of both the economic and regional policies in order to accommodate the accession of the new member countries will bring about a sense of cohesion and co - operation into the union as well as a sense of belonging. ...read more.