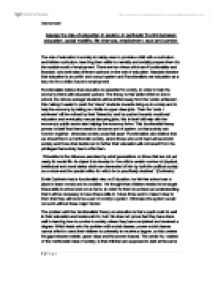 Assess the role of education in society, in particular the link between education, social mobility, life chances, employment, race and gender.

Assess the role of education in society, in particular the link between education, social mobility, life chances, employment, race and gender. The role of education in society is mainly seen to provide a child with a curriculum and hidden curriculum; teaching them skills to mentally and socially prepare them for the outside world of employment. There are two views which are Functionalists and Marxists, who both take different opinions on the role of education. Marxists theorise that education is an unfair and corrupt system and Functionalists see education as a key role for a childs future in employment. Functionalists believe that education is essential for society, in order to help the economy thrive with educated workers. The theory is that whilst children are in school, the 'above average' students will be shifted away from the 'under achievers', this making it easier to push the 'clever' students towards rising up in society and to help the economy by taking on middle to upper class jobs. Then the 'under achievers' will be noticed by their 'hierarchy' and be pushed towards vocational education and eventually manual labouring jobs, this in itself will help with the economy's public sector also helping the economy thrive. This functionalist theory proves to itself that there needs to be some sort of system so that society can function together, otherwise society would fall apart. ...read more.

they have, people that can ideologies a system for the lower classes to follow, the lower class people are not accepted as people who have enough 'common sense' to be 'thinkers'. "the class which is the dominant material force in society is at the same time its dominant intellectual force" (Marx 1964,78) Most of the time society can see that the majority of working class people are more likely to take on vocational education and go into a career that is based on their physical being and not mental being. Society can definitely see that the middle class community are people who go for careers that are 'thinking' careers for example working as a lawyer, to be a lawyer the majority of your time would be to 'think' and express your knowledge of the law. The problem with the Marxists theory on education is that it is not realistic in terms of modern society. Life as we know it, from the beginning of time communities have had leaders of groups, villages, towns, even countries, from hunters to witch doctors, people have always played their different part in their society. So the Marxist theory would not completely work as a whole, unless the worlds so called 'civilisation' were to change dramatically and we would also have to change our state of mentality and way of living our everyday lives. ...read more.

This is also a similar problem when revising the situation of ethnicity, with gender and ethnicity, girls still tend to do better than boys. Once again, because of the functionalist theory that has been practiced in society, social class seems to be the reason of ethnic failures and successes. It must be a difficult situation if a student was not from a wealthy family and English is not their first language. The majority of these students tend to fail in the in British educational system (Race and Exam Success); this is due to the fact that British education is not catered to these ethnic minority groups. What is happening now that the majority of these students are failing, they are being hauled into carrying on their 'education' in vocational courses. New vocationalism is designed for 'failed' students to 'help' them to get into the workforce, and to give them experience of working. On the other hand New Vocationalism is also designed to help the 'economy' by taking in cheap labour and not providing the students with meaningful training. Rounding up this information, education has shown that it is a key to employment in one respect, but is also a functionalist system of jurisdiction amongst the youth of our society. Till this day, the majority of A-level students have tended to be from a white middle class background, helping them to go onto university, and then a middle class job. This proves how unequal the education system in the U.K is. ...read more.