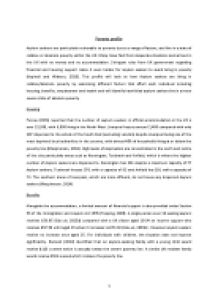 Asylum seekers are particularly vulnerable to poverty due to a range of factors, and live in a state of relative or absolute poverty within the UK

Transfer-Encoding: chunked ﻿Poverty profile Asylum seekers are particularly vulnerable to poverty due to a range of factors, and live in a state of relative or absolute poverty within the UK. Many have fled from desperate situations and arrived in the UK with no money and no accommodation. Stringent rules from UK government regarding financial and housing support make it even harder for asylum seekers to avoid living in poverty (Aspinall and Watters, 2010). This profile will look at how Asylum seekers are living in relative/absolute poverty by examining different factors that affect each individual including housing, benefits, employment and health and will identify how failed asylum seekers live in a more severe state of absolute poverty. Housing Percey (2015) reported that the number of asylum seekers in official accommodation in the UK is over 22,500, with 6,000 living in the North West. Liverpool houses around 1,400 compared with only 287 dispersed to the whole of the South East (excluding London) despite Liverpool being one of the most deprived local authorities in the country, with almost 40% of households living at or below the poverty line (Macpherson, 2014). High levels of deprivation are concentrated in the north and centre of the city particularly areas such as Kensington, Tuebrook and Anfield, which is where the highest number of Asylum seekers are dispersed to. ...read more.

Health Research by MIND (2009) reported that refugees and asylum-seekers face many obstacles in accessing health services in England and Wales. Asylum seekers who are awaiting an outcome of their application or appeal are entitled to free health care, however the regional asylum activism project, reported that people seeking asylum are not getting the healthcare they need, which is putting both individuals and the wider public at risk. Health watch Liverpool (2014) submitted a complaint to NHS England, as a range of GP practices in Liverpool refuse to accept asylum seekers. The report also highlighted barriers asylum seekers face in health services, such as: not knowing the system, language barriers and discrimination from staff. Individuals require a medical declaration to apply for Section 4 support and are faced with charges ranging from £15 - £75. People who are applying for this support generally have no access to financial help and if section 4 is granted, it is on a pre-paid card, which would not allow the individual to pay back any money loaned to afford the medical declaration. Macpherson (2014) reported that there are currently no official figures on the amount of asylum seekers registered with GPs or on their status in the asylum process however Taher (2015) reported that there are 816 patients registered with practices in Liverpool providing the local enhancement service in 2014/15. ...read more.