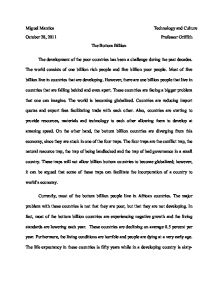 Bottom Billion. Currently, most of the bottom billion people live in African countries. The major problem with these countries is not that they are poor, but that they are not developing.

Miguel Mantica Technology and Culture October 28, 2011 Professor Griffith The Bottom Billion The development of the poor countries has been a challenge during the past decades. The world consists of one billion rich people and five billion poor people. Most of five billion live in countries that are developing. However, there are one billion people that live in countries that are falling behind and even apart. These countries are facing a bigger problem that one can imagine. The world is becoming globalized. Countries are reducing import quotas and export fees facilitating trade with each other. Also, countries are starting to provide resources, materials and technology to each other allowing them to develop at amazing speed. On the other hand, the bottom billion countries are diverging from this economy, since they are stuck in one of the four traps. The four traps are the conflict trap, the natural resource trap, the trap of being landlocked and the trap of bad governance in a small country. These traps will not allow billion bottom countries to become globalized; however, it can be argued that some of these traps can facilitate the incorporation of a country to world's economy. Currently, most of the bottom billion people live in African countries. ...read more.

Furthermore, a crash in the price of the natural resource could also devastate a country's wellbeing. The economy can go into a recession at any moment and the price of the resource could fall significantly, making it hard for the government or the companies to repay its investment debt. This happened to Nigeria in the 1980's and the living standards of the people reduced by half. This point of view that a natural resource leads to lower standard of living can be argued. Likewise, an economy could continue to operate properly with stable prices and a country would gain enormous revenues. Furthermore, there are many countries such as Venezuela and Saudi Arabia that its complete economy depends on a natural resource and are doing really prosperous. In fact, if a country has enough natural resources, it can afford to forget about its normal economic activity. The country could fully invest in a resource and export it to many countries. This will make the other export invaluable; however, the revenue from the export of the natural resource can make the tradeoff worthy. Even if the country loses revenue from other exports, it can gain much profit from just one good. For example, countries can get oil at really low prices and sell it over $100 per barrel, since the demand tends to be really high. ...read more.

"It is not like black hole; it is not impossible escape from the traps, just difficult." Countries can come up with peace holds just like it currently happened in Angola or reforms that can transform the government and its policies. The other two traps which are having natural resources and being landlocked can have many negative effects; however, under the right circumstances it might lead a country to a high growth state. The excess exportation of one natural resource will cause the country's currency to rise making the exportation of other resources to become invaluable. However, if you have enough of a natural resource it might be worthy to sacrifice normal economic activity and just gain enormous profit from that resource. Landlocked effects completely depend on the neighbors. A good neighborhood can lead the country to high growth, since your country will trade goods with them. A bad neighborhood will not let you export your resources and will lead the country to negative growth. Overall, bottom billion countries need escape from the traps quickly, since later it will be almost impossible to integrate in the globalized world. Advance countries will have huge economies of scale through the usage of modern technology and produce goods at really low costs. Not even with cheap labor, bottom billion countries will be able provide lower prices than the advance countries. Therefore, bottom billion countries need escape the traps and incorporating with world's economy in the next 10 years. ...read more.