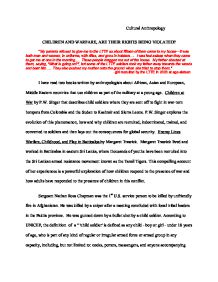 Children and warfare, are their rights being violated?

Cultural Anthropology CHILDREN AND WARFARE, ARE THEIR RIGHTS BEING VIOLATED? "My parents refused to give me to the LTTE so about fifteen of them came to my house-it was both men and women, in uniforms, with rifles, and guns in holsters.... I was fast asleep when they came to get me at one in the morning.... These people dragged me out of the house. My father shouted at them, saying, "What is going on?", but some of the LTTE soldiers took my father away towards the woods and beat him.... They also pushed my mother onto the ground when she tried to stop them." -girl recruited by the LTTE in 2003 at age sixteen I have read two books written by anthropologists about African, Asian and European, Middle Eastern countries that use children as part of the military at a young age. Children at War by P.W. Singer that describes child soldiers where they are sent off to fight in war-torn hotspots from Colombia and the Sudan to Kashmir and Sierra Leone. P.W. Singer explores the evolution of this phenomenon, how and why children are recruited, indoctrinated, trained, and converted to soldiers and then lays out the consequences for global security. Enemy Lines Warfare, Childhood, and Play in Batticaloa by Margaret Trawick. ...read more.

Advances in light weaponry along with the large number of arms left over from the Cold War likewise facilitate child exploitation (3). Charles Taylor of Liberia, In the early 1990s he turned an army of 150 amateur soldiers armed with small arms into a force of thousands by the recruiting and using child soldiers. He demonstrated the potential payoff. Through child soldiers, he was able to use a small gang to gain a kingdom. Most groups forcefully pick up children from the streets and orphanages or raid villages. They determine whether a child is ready to fight like in the Sudanese People's Liberation Army, it is the presence of two molar teeth. Other children join out of desperation for food and clothing. Lord's Resistance Army (LRA) in Uganda, is known for being made up of just child soldiers. During its 10 yr. fight with the government, they have kidnapped well-over 12,000 children to make into soldiers (4). The LRA's reportedly youngest member they recruited is 5 yrs of age. Children who are forcibly recruited are usually from special risk groups like, street children, the rural poor, and refugees. Some that do enlist, are from the same groups. The short term burdens that affect these kids famine and diseases.75% of people live with HIV live in Africa (5). ...read more.

Child soldier are here to stay whether we like it or not. The relevant question is whether real well-organized troops will be prepared to handle this dilemma. Tamil children are vulnerable to recruitment beginning at the age of eleven or twelve. The LTTE routinely visits Tamil homes to inform parents that they must provide a child for the "movement." Families that resist are harassed and threatened. Parents are told that their child may be taken by force if they do not comply, that other children in the household or the parents will be taken in their stead, or that the family will be forced to leave their home. The LTTE makes good on these threats: children are frequently abducted from their homes at night, or picked up by LTTE cadres while walking to school or attending a temple festival. Parents who resist the abduction of their children face violent LTTE retribution. Once recruited, most children are allowed no contact with their families. The LTTE subjects them to rigorous and sometimes brutal training. They learn to handle weapons, including landmines and bombs, and are taught military tactics. Children who make mistakes are frequently beaten. The LTTE harshly punishes soldiers who attempt to escape. Children who try to run away are typically beaten in front of their entire unit, a public punishment that serves to dissuade other children who might be tempted to run away. ...read more.