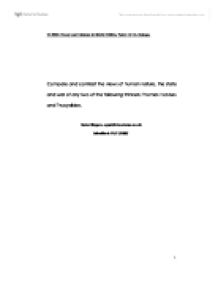 Compare and contrast the views of human nature, the state and war of any two of the following thinkers: Thomas Hobbes and Thucydides.

IR 2003: Power and Violence in World Politics, Tutor: Dr M. Rologas Compare and contrast the views of human nature, the state and war of any two of the following thinkers: Thomas Hobbes and Thucydides. Andre Wegner, [email protected] Submitted: 19/11/2003 Thomas Hobbes once acknowledged that he drew inspiration from Thucydides' History of the Peloponnesian War for his master piece Leviathan. In effect the theories represented in their books are more similar than other works of political theory might be. Undeniably both Thucydides and Hobbes argue that war is inevitable, that human nature is anarchic and that the strongest will therefore "rule whatever one can"1. However, despite these similarities there are also marked differences. Whereas Hobbes might argue this law of nature can be disrupted by the peoples desire for peace and security, Thucydides remains pessimistic and sees no way past the inevitability of war. Many more differences, which will be examined further on in the text, widen the gap between the two theorists who nonetheless remain fundamentally close, despite over two thousand years age difference. In April 1588 Thomas Hobbes was born into a tumultuous era of political and scientific change. ...read more.

Hobbes however has a more optimistic outlook. At a very basic level he assumes that all men are equal9. This leads him to conclude that there is a way out of the evil cycle of nature: education. This is the crucial difference between Hobbes and Thucydides. Though both agree that ambition is inherent in human nature and will inevitable cause conflict, only Hobbes points to a path leading away from it. The dilemma of conflict, "all states... will be subject to these fits of rebellion, as long as the world lasteth", now seems easier to bridge, "Like enough; and yet the fault ... may be easier mended by mending the Universities"10. It is this education that will be able to "promote rational fear (and) obedience to the state"11. In Hobbes's eyes this means that education will lead to obedience to the sovereign; for total acceptance of the sovereigns rule is the only way to end infighting and therefore conflict, creating 'eternal peace'. The state is therefore a centrepiece of Hobbes' peaceful world, or rather the Leviathan is. It is essential to Hobbes theory that the sovereigns power is absolute and unassailable. ...read more.

This also emphasises the point that all people are different which was the original anarchic problem that both Hobbes and Thucydides acknowledged. This joint recognition is the is the very basis of their agreement. But from there on paths diverge. Whereas Hobbes tries to find optimistic and sometimes idealistic solutions, Thucydides maintains that "Cities and individuals alike, all are by nature disposed to do wrong, and there is no law that will prevent it"21. The theorist Hobbes, on the one hand, recognises a vicious circle in the cycle of war, the yearning for peace, security and the renewed struggle for immortality but assumes that the desire for peace is predominant in human nature. Thucydides on the other hand seems to accept that the yearning for peace is always and always will be second to the pursuit of glory to any price. War therefore is for both Thucydides and Hobbes the state of nature, though Hobbes does try to change this. But his Leviathan seems to leave room only for the very slightest argument and discussion, as even that would be seen to disturb the peace. Peace of that dimension, without even the threat of war or violence seems unimaginable. War has inevitably scarred us and the knowledge of violence an its impact alone is enough to yet again awaken the pursuit of immortality. ...read more.