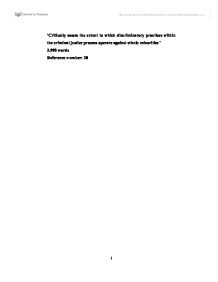 More specifically, 'from those charged by the prosecutor service with the offence of robbery, at least a third was African-Americans; a higher proportion than their representation in the population' (Department of Criminology, 2006/07:8-15). According to Spohn, Gruhl and Welch (1987), an analysis of more than 30,000 cases from the Los Angeles County showed that cases against blacks and Hispanics were significantly more likely to be prosecuted than cases against whites (Banks, 2004). Another study proposes that the prosecutor agency is less likely to divert minority ethnic groups from the legal process than whites who have committed crimes of the same seriousness (Senna and Siegel, 2002). Moreover, 'In 2001 the leading academic lawyer Sylvia Denman found "unwarranted complacency over the possibility of race discrimination in the prosecution process" ' (BBC News, 2003). In contradiction, Phillies and Brown's study of 1,175 suspects found that there were higher rates of termination in cases involving black suspects (20%), Asian suspects (20%), while for white suspects the rate was 12% (Department of Criminology, 2006/07). This study suggests that prosecutors' decisions are maybe based upon other factors beyond one's national origin. Although the gathering of the evidence in the above surveys is not conclusive, they overall reveal trends of discriminatory practices in the prosecution organisation. The last stage of the criminal justice process which has also became subject of many studies involving discriminatory practices against racial minorities, is the court. The court's fundamental role is to decide: 1) whether the defendant should be given bail or be remanded in custody until the trial, 2) whether or not the defendant is guilty and 3) in case the defendant is guilty, the appropriate sentence (Department of Criminology, 2006/07). The two most important types of courts within the adversarial criminal justice process are the magistrates' courts and the crown courts. In the magistrates' courts offenders who are charged with minor offences are prosecuted, in contrast to the crown courts that deal with more severe crimes (Department of Criminology, 2006/07). ...read more.

As a result, they focused more on people from ethnic minority groups than white people and as a rational repercussion, they found more extensive illegal activities amongst these groups than amongst whites. Subsequently, stereotypes were reinforced and were able to survive into contemporary attitudes and practices. The existence of this never ending cycle in combination with the factors mentioned above cause, to some extent, discriminatory practices within the criminal justice system. Conclusion In conclusion, 'the debate about racial discrimination in the criminal justice system remains unresolved' (Banks, 2004:72). There has been a steady accumulation of research on racial differentials within the criminal justice process that show that members of ethnic minorities receive less favourable treatment than whites as victims as well as offenders of crime. Nevertheless, that does not mean that all practitioners within the system operate in an unjust manner. 'Although there is racial discrimination within the criminal justice system, the system itself is not characterised by racial discrimination' (Banks, 2004:60). Discrimination within the criminal justice system is not systematic. These discriminatory practices exist only to some extent and they are caused by a combination of factors such as prejudices and social and political pressures. Therefore positive steps can and should be taken in order to prevent any further discrimination. The fact that some people have a different skin colour or different culture and customs from the majority of the population that does not mean that they are mean people who have a stronger urge than whites to exhibit antisocial behaviour and break the law. Essentially, all people are the same inside. Furthermore, in order to decide whether a person should go through the criminal justice process, the agencies should act ethically and base their decisions only upon legal factors such as the type of crime, the seriousness of the charges, prior convictions, whether the injury is serious and the available evidence (Lampropoulou, 1999). People all over the world deserve to be treated justly within the criminal justice process. If the above solutions be implemented, then it will be a fair and equal justice for all races of people. ...read more.