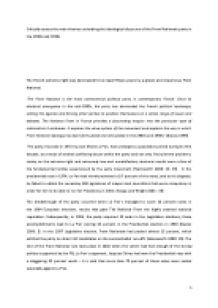 Critically assess the main themes underlying the ideological discourse of the Front Nationale party in the 1980s and 1990s in France.

﻿Critically assess the main themes underlying the ideological discourse of the Front Nationale party in the 1980s and 1990s The French extreme right was dominated for at least fifteen years by a grown and impervious Front National. ?The Front National is the most controversial political party in contemporary France. Since its electoral emergence in the mid-1980s, the party has dominated the French political landscape, setting the agenda and forcing other parties to position themselves on a whole range of issues and debates. The National Front in France provides a fascinating enquiry into the particular type of nationalism it embraces. It explores the value system of the movement and explains the way in which Front National ideology has been formulated and articulated in the 1980s and 1990s? (Davies 1999). The party, founded in 1972 by Jean Marie Le Pen, had undergone a pejorative period during its first decade, as a result of several conflicting issues within the party and not only. Recruitment problems, rivalry on the extreme right and extremely low and unsatisfactory electoral results were a few of the fundamental hurdles experienced by the early movement (Hainsworth 2000: 18, 19). ...read more.

The National Front believes that the perils that threaten nation states and Europe are the same : Communism (before its collapse) and Third World Immigration ? the party claims that ?there will be no Europe if there is no vocation to become a nation? and that it should be searching for ?soldiers and heroes? (Davies 1999 : 105). Another threat to the nation an it?s national identity is identified by Le Pen : the decline of the French population. The party puts the blame this time on the French women; they believe that a woman is supposed to ? produce babies?. Sigrid Conrad, who worked for the FN, stated that the ?babies are not just for ourselves but for France? ; this statement emphasizes the fact that nation and nationality are seen as ?functions of blood, genes and racial origins? (Davies 1999 : 121). Another peril brought by the decline of the native French population is that it gives the immigrants the opportunity to settle a lot easier in France ? these immigrants might be ?used? to solve the demographic problem ( as suggested by the UDF ). The National Front strongly opposed this idea ? they believed that immigrants would destroy the national identity of the country , as only ...read more.

Le Pen wanting the individual to live long and prosper within a traditional, religious and historic community is another way of expressing populism ( Atkins and Tallet 2002 : 262-264). On the other hand, Fysh and Wolfreys(2001) argue that Jean Marie Le Pen cannot be seen as the ?leader of a normal party ? part of the political game?. They raise a point which is, indeed , worthy of our attention : ? The FN has made its appearance in a country with mass unemployment, a social crisis, bankrupt politics; it has built a mass base on a personality cult and exploitation of a ready-made scapegoat; many of its leaders are psychotically anti-semitic; others have records of terrorism or other forms of violence. It is a new party , largely excluded from positions of power? . However, the idea that the National Front is a populist movement is far more applicable ? the party is not a revolutionary organization ? fascist organizations have the tendency of turning the society upside down by setting up a totalitarian regime ( Atkins and Tallet 2002 : 264). Its ideological discourse is based on the well being of the nation ? therefore its disregard towards immigrants, globalisation , the European union, abortion, contraceptives or homosexuals. ...read more.