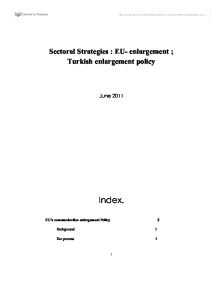 Sectoral Strategies : EU- enlargement ; Turkish enlargement policy June 2011 Index. EU's communication enlargement Policy 3 Background 3 The process 5 Turkey's European Union communication strategy. 7 Turkey's prospective as a possible member of the EU 7 Date Map 7 Financial help from the EU to Turkey 10 EU-Turkey Civil Society Dialogue 12 Transformation of Turkey 13 Turkey's Identity and Security Culture in the Path to Europe 13 The Role of the USA 17 Conclusions 20 Bibliography 21 1. EU's communication enlargement Policy Background Since the Commission adopted its Communication Strategy for Enlargement in May 2000, the dynamic of the accession process has accelerated. Given this timeframe, it is all the more important that the opportunities presented by enlargement be understood in the present and future member states. "Eurobarometer" surveys indicate that the importance of enlargement is gradually being understood in the existing Union, but there remains a widespread ignorance about the candidate countries, which hampers public support for the process. In addition, while public support for enlargement remains relatively high in the candidate countries, misperceptions persist, which give rise to fear and concerns that need to be addressed. Up to now, the preparations for enlargement were based on two tracks: the pre-accession strategy and the accession negotiations. The development of the communication strategy is now the third track in the preparations for enlargement. The Commission Communication in May 2000 set clear objectives for the communication strategy. The overall aim is to inform people in the 15 member states and 13 candidate countries of the process and consequences of enlargement. The activities in the candidate Turkey as a member of the EU countries necessarily set enlargement in the context of a larger effort to increase knowledge of the EU. Activities in the member states can build on a longer history of EU-related information, but require a new focus on issues raised by the enlargement process, in the same way as other campaigns have focused on the Single Market, the �, etc. ...read more.

EU-TURKEY Civil Society Dialogue EU-Turkey Civil Society Dialogue seeks to integrate civil society into the process of Turkey's EU accession. It aims to generate mutual knowledge and understanding between civil societies in both Turkey and EU Member States. The dialogue creates fora where mutual concerns and topics of common interest can be discussed. Further to the EU funded activities below, projects contributing to Civil Society Dialogue are also carried out on a bilateral basis between EU Member States and Turkey. CURRENT ACTIVITIES -CLOSED CALLS FOR PROPOSAL � "Small Projects Programme: Strengthening Civil Society Dialogue" (�750,000) This programme supports the broad goal of deepening dialogue and enhancing mutual understanding between civil society in Turkey and the EU Member States. 17 projects are currently being carried out with partners in 13 countries. These projects cover a variety of issues, including youth, business community dialogue, minority rights, regional development and disabled persons. -OPEN CALLS FOR PROPOSAL � "Civil Society Dialogue: Europa-Bridges of Knowledge" (�1.4 million) Open until 10 August 2006: Projects under this programme focus on establishing networks and strengthening existing collaboration between NGOs and universities based in Turkey and the EU to enhance Turkey's expertise on the Acquis Communautaire, ie the body of EU law. � "Strengthening Civil Society Dialogue: Participation in NGO events in the EU" (�50,000) Open until 30 October 2006: This programme provides financial support for study visits, exchanges and NGO participation in platforms, meetings and conferences in the EU. � "Civil Society Dialogue: Culture in Action" (�1.45 million) Open until 5 December 2006: This call for proposals provides funding for joint EU-Turkey cultural projects on the one hand and information/media activities regarding EU affairs on the other. It aims at raising public interest in Turkey in different aspects of European art and culture and increasing knowledge of the EU accession process. -COMMUNITY PROGRAMMES � Education (Socrates, Leonardo da Vinci, and Youth) and Culture 2000 Socrates, Leonardo da Vinci, and Youth are Community programmes in the field of education. ...read more.

In retrospect, one should also recognize that persistent American pressure for Turkey's EU membership had one important negative side effect. For a long time, it led significant elements of the state establishment in Turkey, notably the security and foreign policy making elites, to assume that they could avoid implementing certain key components of Copenhagen criteria. Given Turkey's security importance and American support, they hoped to evade some elements of the Copenhagen criteria, such as the provision of cultural rights for the minorities (meaning the Kurds in the Turkish context), which they considered to constitute a threat to the unity of the nation state. Rather paradoxically, therefore, strong American support for Turkey's EU membership tended to strengthen the 'anti-EU coalition' in Turkey, meaning those who did not oppose EU membership per se but rather the political and economic conditions attached to EU membership. Indeed, such groups tended to view the US-Israel-Turkey axis as a natural basis for Turkish foreign policy and security interests and as a natural alternative to EU membership, which according to them was unlikely to be realized in any case given the conditions attached to such membership. Clearly, the position of these groups in Turkish politics was fundamentally shaken by the US-led war on Iraq and the strains in Turkish-American relations experienced in this context. 4. Conclusions The Turkish leaders have been walking on a diplomatic tight-rope and it is essential that they strike a delicate balance between Turkey's own security interests, the necessities of its close alliance with the US, its European orientation and the public demands. along with the extension of social interactions between the EU and Turkey, Turkey has reproduced her interests in parallel with her transforming identity. As known, in the constructivist approach, as a result of social interactions, actors in the international system are prone to change or redefine their interests in accordance with their identities. So, it can be asserted that in the relations between the EU and Turkey a change in Turkey's interests is obvious. ...read more.