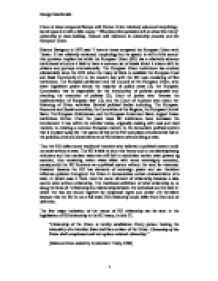 I have at times compared Europe with Tarzan. It has relatively advanced morphology but its speech is still a little scanty. What does this quotation tell us about the role of citizenship in state-building. Discuss with reference to citizenship practise

states within a political system in order to maintain its strength in determining citizens duties in order for them to enjoy their rights. In the EU this involves member states sacrificing sovereignty in order to gain the cooperation of other members. Therefore within the EU it can be said that the role of citizenship in state building is that the introduction of the constitutive element of citizenship practise with EU institutions and the sacrifice of sovereignty from member states has consequently given the EU power over the development of the rights and duties of citizens. This has to lead to the building of the EU as a nation state because 'citizenship, exclusive territoriality and sovereignty define modern states' (Malvestiti 1959: 58) and the EU now has elements of citizenship as well as some sovereign power. Etienne Davignon refers to the strength of the EUs structure and institutions when she talks about 'a relatively advanced morphology' however limits the usefulness of these because of a lack of 'speech'. Additionally citizenship changes have changed the stateness of the EU member states because member states scarifies sovereignty to the EU they have weakened as modern nation states, which has lead to the change in constitutive citizenship practise. Therefore EU member states have been built into a new type of state because of the change in sovereignty and citizenship practise. This new type of state uses the institutions of the EU to direct the rights and duties of citizens, and to utilize the 'pool' of sovereignty given to it by its member states in order to remain a strong and effective state in its own right. ...read more.

To evaluate, the quotation; 'I have at times compared Europe with Tarzan. It has relatively advanced morphology but its speech is still a little scanty' tells us that even with an advanced structure, like the EU has developed, which allows a political systems institutions to be able to deal with the development of citizen rights, has legal citizenship, and has control over a 'pool' of sovereignty, its development into a nation state will always be limited by its ability to create commonality (effective speech). This consequently would lead us to conclude that citizenship is key to building new states because without all aspects of citizenship practise being applicable the emergence of a state will be incomplete as shown in the case of the EU being unable to develop into a nation state because despite displaying many characteristics of a nation state it does not possess all elements of citizenship. Furthermore Etienne Davignons words can tells us about the role of citizenship in state building in pre-established nation states ie the changes occurring to nation states stateness as a result of membership of the EU. Davignon highlights the view that EU member states have evolved thanks to the effect that EU legislation has on its policymaking and the level sovereign power the nation possess. And that the EU has not replaced individual member states as an overall nation state because of its inability to replace the culture of member states and therefore fails to unify the citizens to create European Union citizenship. ...read more.