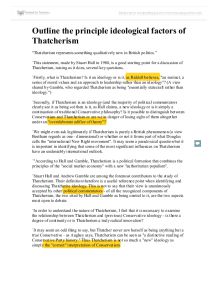 Outline the principle ideological factors of Thatcherism "Thatcherism represents something qualitatively new in British politics." `This statement, made by Stuart Hall in 1980, is a good starting point for a discussion of Thatcherism, raising as it does, several key questions. `Firstly, what is Thatcherism? Is it an ideology or is it, as Riddell believes, "an instinct, a series of moral values and an approach to leadership rather than an ideology"? (A view shared by Gamble, who regarded Thatcherism as being "essentially statecraft rather than ideology.") `Secondly, if Thatcherism is an ideology (and the majority of political commentators clearly see it as being so) then is it, as Hall claims, a new ideology or is it simply a continuation of traditional Conservative philosophy? Is it possible to distinguish between Conservatism and Thatcherism or are we in danger of losing sight of them altogether under an "overelaborate edifice of theory"? `We might even ask legitimately if Thatcherism is purely a British phenomenon (a view Beetham regards as one - dimensional) or whether or not it forms part of what Douglas calls the "international New Right movement". It may seem a paradoxical question but it is important in identifying that some of the most significant influences on Thatcherism have an undeniably international outlook. `"According to Hall and Gamble, Thatcherism is a political formation that combines the principles of the "social market economy" with a new "authoritarian populism". ...read more.

of the community rather than the market ...") but there is an argument for continuity if we accept that the post-war consensus was broken not by Thatcher but by the "Powellism of the 1968-9 period" and the "Heath Programme in 1970". `Heath's "Selsdon Man Programme" advocated restricting the flow of money into the system, abolishing government subsidies to private businesses and attacking the public sector and the trade unions - does this sound familiar? Dix described the programme as "the first step in a return to the laissez - faire philosophy from which the Tory Party was cradled", whilst going on to assert that "the primeval stirrings of the 1970 Selsdon Man had become the fully mature beast of 1979." In one respect then Thatcherism would appear to be a continuation, although it is argued that Thatcherism went further as it associated Statism with socialism - thus Thatcherism is anti-socialist (hence her admirable desire "not merely to put a temporary brake on socialism but to stop its onward march once and for all") as well as anti-Statist and Keynesianist. `One could say therefore that Thatcherism is an attempt at a pure anti-socialist/statist ideology. When one thinks of Thatcherism one thinks of monetarism, the need to control public spending and eradicate inflation (regardless of the social consequences, which are usually massive unemployment and social deprivation) ...read more.

Hence middle-class values are lauded as the spirit of national greatness. This is what is meant by populism - "national interests which are supposedly held above class interests drawing on the ideology of a neutral marketplace working in the interests of all." Ironically, the authoritarian nature of this populism is undoubtedly traditional Conservatism - the Tories have always been the party of "Law and Order" (which is understandable since both Thatcherism and Conservativism see private property as a God-given right) - or as Thatcherism puts it, "liberty and order" (a free economy and a strong state). `What then can we say about Thatcherism in conclusion? There are other aspects of Thatcherism that could be examined, but they are easy to identify once the major tenets are known e.g. as a middle-class ideology you would expect it to have a middle-class/authoritarian stance and indeed it was a Thatcherite who said that if God had intended to give us all equal rights He wouldn't have created man and woman - the view being that the dutiful wife should stay at home and look after the children whilst hubby goes to work, which is certainly not a working-class mentality. `As an ideology, Thatcherism is a paradoxical mish-mash - as a system of government though, it would appear to be very successful, but then as Gamble says, "Thatcherism has been more about restoring ... the political fortunes of the Conservative Party than it has been about constructing a free economy. ...read more.

Firstly - any quotes used need to be properly referenced, - either in a footnote containing the full reference, or via the Harvard system (author, date, page) in brackets referring to a full bibliography at the end.

That aside, this is a very interesting essay with some questionable 'wrapping'. The ideas are fantastic, dense, and show a really comprehensive analytical grasp of the tenets of Thatcherism.

Nonetheless, the dodgy referencing, constant use of rhetorical questions, poor use of paragraphs, and occasionally jumpy argument means that the content is not presented to the best effect. A more progressive plan, outlining what each paragraph will do, would have made a big difference to the overall essay. In effect the author has done the hard work, it's just badly packaged.