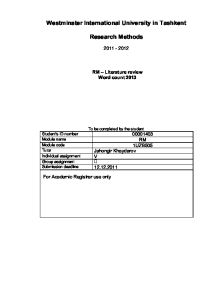 Research Project - Efficiency of the parliament as a legislative branch in Russia.

Westminster International University in Tashkent Research Methods 2011 - 2012 To be completed by the student Student's ID number 00001403 Module name RM Module code 1UZB505 Tutor Jahongir Khaydarov Individual assignment V Group assignment ( Submission deadline 12.12.2011 For Academic Registrar use only Efficiency of the parliament as a legislative branch in Russia. Abstract: Since the fall of Soviet Union and until now Russian economic and political systems are changing. The old system was not effective enough to compete with modern world market. And whole population of ex Soviet Union wanted freedom and full protection of their rights. They wanted to have a right to choose political party, to play at least small influential role in political live of their homeland. And with the new government people finally witnessed these changes through Constitution of the Russian Federation 1993. Since that time Russia started a transition to new democratic system. This transition was going really hard, as everybody know, 1990s were a harsh times for all aspects of life, for politics, economics, social life. But after Boris Eltsin, the new president had come. And then, I could say that chaos stopped. Putin started to restore the order with Parliament. One of the most important parts of Constitution of the Russian Federation is chapter 5, which is about Federal Assembly - Russian Parliament. Parliament is the essential demonstration of democracy principles, so one of the most important goals for government is to increase efficiency of the Federal Assembly. ...read more.

Do they need depriving immunity? 3) How the opposition develops in Russia? What can help it? 4) What actions could be taken to achieve more efficiency in work of the Federal Assembly? Hypotheses: 1) Deficiency of political opposition in the Parliament. In Russian Parliament more than 50% majority belongs to United Russia party. The lack of opposition is bad for parliament as legislative branch, because in this case most of the laws will satisfy only half of population of the country. But deputies cannot be fully striped off their immunity, because then they could suffer from governance that not often likes to have a strong opposition. The way to solve this problem is for citizens to be more politically active, to create more parties. But first of all, there must be a flow of parties in parliament, because when one party has a governance power for a long time, then we will face second Soviet Union. Thus president of Russia need to make new legislations maybe even constitutional, to refresh parliament with new faces, new parties and new ideas and points of view. 2) Personnel issues is the second problem that I think need solvation in the first place. This problem is developed because of depriving immunity and not changing faces in the parliament, that brings more corruption. Because of their immunity deputies often are very corrupted, because they use their immunity and connections for their own benefit. First of all immunity should be reconsidered and more policies for government workers should be added. Government should create an institution, which will inspect workers of parliament. ...read more.

"Party of Putin/Medvedev will be cut in-live" - made by Aleksey Polubota. They are talking about what will happen to United Russia Party in the next few years, and how these last elections in the Duma will affect political influence and behavior of United Russia. Aleksandr Shatilov says that these elections will shake United Russia a bit. Even though there is still no Party that could be counterweight for United Russia, but now UR will need to listen more to the opposition and to act without overlaps with their interests. Putin is not satisfied with feedbacks and results of these elections and because of these, there will be a lot of changes in the structure and work of United Russia. I agree with Aleksandr Shatilovs' point of view, and as we can see from the news, actions to increase efficiency of Parliament already started. Information Resources: For my dissertation I used primary sources in the first place, because I needed to learn about Parliaments of the world from constitutions of these countries. And only after that I started to work with secondary sources. After that I understood, that topic of my dissertation is quite interesting and I need to work more with secondary sources, because they are not so dry and even if sometimes they are more contradictory, they are much more interesting. Schedule of the research: Stage of the Research Task to be achieved Timeframe 1 Choice of the topic and sphere of dissertation October 2 Research questions and finding and reading reliable sources. Finding answers on research questions in found sources. Confirmation of hypotheses November 3 Writing literature review based on materials and sources found December 6 Going to consultations, interviews, questionnaires. ...read more.