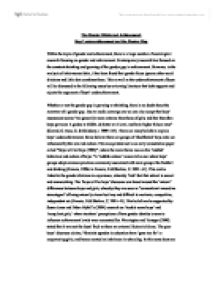 The Gender Divide and Achievement

The Gender Divide and Achievement: Boys' underachievement and the Gender Gap Within the topic of gender and achievement, there is a large number of sociological research focusing on gender and achievement. Contemporary research has focused on the constant shrinking and growing of the gender gap in achievement. However, in the analysis of achievement data, it has been found that gender focus ignores other social divisions and little data combines them. This as well as the underachievement of boys will be discussed in the following essay by reviewing literature that both supports and rejects the argument of boys' underachievement. Whether or not the gender gap is growing or shrinking, there is no doubt about the existence of a gender gap. Due to media coverage etc we can also accept that boys' assessment scores "are generally more extreme than those of girls, and that therefore boys get more A grades at GCSE, do better at A level, and have higher failure rates" (Gorard, G. Rees, G. & Salisbury, J 1999: 443). There are many beliefs to explain boys' underachievement. Some believe there are groups of 'disaffected' boys who are influenced by the new lad culture. This was pointed out in an early consultation paper called "Boys will be Boys (1996)", where the main theme was on the 'laddish' behaviour and culture of boys. ...read more.

Rees, G. & Salisbury, J 1999: 443). This therefore adds to the notion of boys being highly advantaged compared to girls. It is also found that the underachievement is only noticed once girls do better. In the 11 plus entry exams for secondary schools, it was found that girls were set higher targets than boys to reduce the number of girls in grammar schools, compared to the female-dominated primary schools. One error in viewing the gender gap as growing is that found in Gorard, G. Rees, G. & Salisbury, J's (1999) study. They found that politicians along with others have confused percentages with percentage points, which are also shared by writers and media commentators. "At GCSE 'girls have accelerated ahead much faster' than boys and the 'gap has widened' (Guardian, 1998, p. 12)" (Gorard, G. Rees, G. & Salisbury, J 1999: 442). "Therefore, if unemployment decreases from 8% to 7% it may be reported as a decrease of 1%, whereas it actually represents a decrease of 1 point or 12.5% of the original. This lack of differentiation between percentages and percentage points can lead to serious misinterpretation in other circumstances, such as when two such sets of figures are involved" (Gorard, G. ...read more.

As mentioned earlier, crisis of masculinities are one of the reasons explored today in relation to boys' underachieving, and its solution is individual relationship work. There is a change in the social attitudes towards girls in contemporary society, where girls' achievement may not be matched in the labour market with boys, but they see a future in the labour market rather than just domestic work. Middle class women combine work and childcare as well as mother role, whereas working class women always work. This brings me on to another possible solution of the need of men as role models for underachieving boys. As there are mainly female teachers in primary schools, girls find it easier to relate to them causing boys to be unmotivated to work and achieve. But there is also the issue of men being paid more in primary school teaching as well as promotional opportunities, compared to women, which increases the gender pay gap. In my readings I have found that conclusively, gender is and will remain to be a marker in education for underachievement. However we must be aware of how class and ethnicity interact with gender and also explore which is the most significant. The constant media coverage of the competition of gender in education will cause the gender gap to continuously grow and shrink, but undoubtedly it will always remain and exist. ...read more.