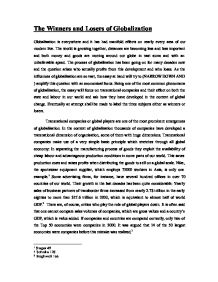 The Winners and Losers of Globalization

The Winners and Losers of Globalization Globalization is everywhere and it has had manifold effects on nearly every area of our modern live. The world is growing together, distances are becoming less and less important and both money and goods are moving around our globe in vast sums and with an unbelievable speed. The process of globalization has been going on for many decades now and the question arises who actually profits from this development and who loses. As the influences of globalization are so vast, the essay at hand will try to (NARROW DOWN AND ) amplify this question with an economical focus. Being one of the most common phenomena of globalization, the essay will focus on transnational companies and their effect on both the state and labour in our world and ask how they have developed in the context of global change. Eventually an attempt shall be made to label the three subjects either as winners or losers. Transnational companies or global players are one of the most prominent emergences of globalization. In the context of globalization thousands of companies have developed a transnational dimension of organisation, some of them with huge dimensions. Transnational companies make use of a very simple basic principle which stretches through all global economy: In separating the manufacturing process of goods they exploit the availability of cheap labour and advantageous production conditions in some parts of our world. ...read more.

Yet, the statement of several globalization critics that the state has lost its role as a meaningful unit in our global economy can be falsified.89 Governments can still influence the effects globalization has in the respective country. This can for example be achieved through monetary, consumer or labour policies. Good policy making and the right use of global finance and institutions has helped stronger states to rise to modern superpowers. The most prominent example for this are probably the United States.10 In addition, the state can still exercise control over affairs like infrastructure, education and population movement.11 It would therefore be wrong to say that the state has lost its meaning. It has rather in a progress of reshaping and turning towards a global constituency, as Scholte puts it. Instead of protecting their domestic interests from foreign intrusions, they are now rather providing an "arena of collaboration and competition between a complex array of national and transnational players."12 Examples for this are the state who serves both the interests of global capital and national capital or state policy which reacts to the needs of global production chains, financial markets and other supraterritorial events and processes. Yet, states can also interfere with global trade through protectionism to ensure the continued existence of domestic industries; they do not always follow the demands of global developments. 13 The manner with which transnational companies work to guarantee the cheapness of their products has been criticized severely during the last decades. ...read more.

countries.21 Sweatshops certainly exist but what has to be criticized then is not the working conditions but their enforcements in the respective countries. In short, production sites with poor working conditions certainly exist in developed countries but it is again not the process of globalization alone which causes these. In conclusion, it has been shown that it is sometimes hard to determine winners and losers in the process of globalization. If we consider the massive amount of money and both economical and political power they can command nowadays, transnational companies might be counted as winners. States, although often labelled as losers, clearly had to abandon some of the old Westphalian powers they enacted. Through reshaping and a change of their task field they have maintained a considerable amount of power which disproves the assumption of the nineties and early years of the new millennium, however. It is not easy to say if the average workers in our modern world are winners or losers of the globalization. Those of the industrialized work certainly suffered losses but the reasons for this lie not in globalization alone and it is questionable if the Fordist wealth and employment rate could have been maintained even in a world without globalization. Workers in developing countries could, under the aspects of this essay, be denoted as winners, although it is unclear how inhuman the working conditions actually are and their lives could certainly be improved further with appropriate global working regulations. ...read more.