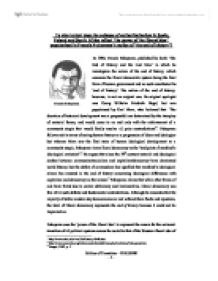 To what extent does the collapse of authoritarianism in Spain, Poland and South Africa reflect 'the power of the liberal idea' popularised in Francis Fukuyama's notion of 'the end of history'?

To what extent does the collapse of authoritarianism in Spain, Poland and South Africa reflect 'the power of the liberal idea' popularised in Francis Fukuyama's notion of 'the end of history'? In 1992, Francis Fukuyama, published his book 'The End of History and the Last Man' in which he investigates the notion of the end of history, which concerns the liberal democratic system being the final form of human government and as such constitutes the 'end of history'. The notion of the end of history, however, is not an original one. Its original apologist was Georg Wilhelm Friedrich Hegel, but was popularised by Karl Marx, who believed that "the direction of historical development was a purposeful one determined by the interplay of material forces, and would come to an end only with the achievement of a communist utopia that would finally resolve all prior contradictions".1 Fukuyama follows suit in terms of seeing human history as a progression of ideas and ideologies but whereas Marx saw the final state of human ideological development as a communist utopia, Fukuyama views liberal democracy as the "end point of mankind's ideological evolution".2 He argues that since the 19th century material and ideological clashes between communism/socialism and capitalism/democracy have dominated world history, but the defeat of communism has signified that mankind's ideological climax has resulted in the end of history concerning ideological differences with ...read more.

These restrictions were seen as impediments to further growth and modernisation. The Opus Dei, who were an influential group in Francoist politics, had hoped that greater economic prosperity would eliminate hostility toward Francoism, but tension between an increasingly dynamic Spanish society and the oppressive regime that governed it resulted in growing domestic opposition throughout the 1960s. The expanding industrial labour force became increasingly militant. Workers organized clandestine commissions and recurrent strikes, despite them still officially being illegal. In addition, regional discontent was giving rise to escalating violent protests in the Basque region and in Catalonia. Agitation was also growing among university students who resented the strictures of Franco's regime. There was even opposition among the members of one of Franco's former bastions of support, the clergy. The younger liberal priests in the Catholic Church in Spain had responded with enthusiasm to the Second Vatican Council, which emphasized individual liberties and progressive social policies. The priests were also increasingly vocal in their attacks on the oppressive aspects of Francoism.7 Political opposition to the regime mounted on all sides in 1974 and 1975. Labour strikes, in which even actors participated, spread across the country. Universities were in a state of turmoil, as the popular clamour for democracy grew more vociferous. Terrorist activity reached such a level that the government placed the Basque region under martial law in April 1975. ...read more.

the elements of the state, South Africa held its first democratic election in April 1994 under an Interim Constitution.11 Due to the unique nature of South Africa's transition from authoritarianism to democracy it is difficult to consider whether it reflects the 'power of the liberal idea'. However there does appear to have been economic liberalisation in terms of the outside worlds sanctions being lifted, and also a struggle for recognition by the black population, hence it could be argued that Francis Fukuyama's notion of the liberal idea is relevant. As seen by the above three cases, namely in Spain, Poland, and South Africa, it would appear that there may be some plausibility in Fukuyama's notion of 'the power of liberal idea' due to the countries' transitions from authoritarianism to democracy reflecting Fukuyama's notion. However, his claim that democracy is most definitely the 'end of history' is much more challengeable. For one, many of today's Western democracies are not egalitarian at all and therefore its seems ludicrous to think that we have reached a political ideology that cannot be surpassed even though the objective of the ideology, egalitarianism, it seems cannot be met. One thing that is for sure, however, is that Francis Fukuyama's notions will continue to be a highly debated issue, for years to come, until maybe one day time may eventually prove his notions either right or wrong. ...read more.