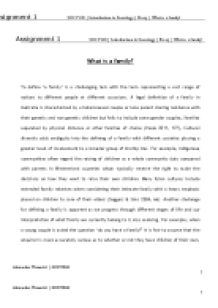 What is a family?

﻿Assignment 1 SOCY100 | Introduction to Sociology | Essay | What is a family? ________________ Assignment 1 SOCY100 | Introduction to Sociology | Essay | What is a family? ________________ What is a family? To define ?a family? is a challenging task with the term representing a vast range of notions to different people at different occasions. A legal definition of a family in Australia is characterised by a heterosexual couple or lone parent sharing residence with their genetic and non genetic children but fails to include same gender couples, families separated by physical distance or other families of choice (Poole 2011, 127), Cultural diversity adds ambiguity into the defining of a family with different societies placing a greater level of involvement to a broader group of kinship ties. For example, Indigenous communities often regard the raising of children as a whole community duty compared with parents in Westernised countries whom typically reserve the right to make the decisions on how they want to raise their own children. Many Asian cultures include extended family relatives when considering their intimate family with a heavy emphasis placed on children to care of their elders (Saggers & Sims 2004, 66). Another challenge for defining a family is apparent as we progress through different stages of life and our interpretation of what family we currently belong to is also evolving. For example, when a young couple is asked the question ?do you have a family?? it is fair to assume that the enquirer is more accurately curious as to whether or not they have children of their own. ...read more.

Additionally, it is no longer economically viable for all women to be able to solely rely on their husband?s income to provide for them and their children due to an increased level of divorce, higher costs of living and an increased rate of male unemployment (Briggs 1994, 1-3). Today, almost half of the employed population is currently accounted for by women, however studies suggest that despite women becoming increasingly successful in achieving equality in the workforce, they are simultaneously performing the same domestic duties within the family once expected of a non-employed housewife including cooking, shopping, cleaning, laundry and childcare (Saggers and Simms 2004, 71). This has resulted in many women struggling to achieve an adequate balance between meeting their career and family desires, leaving many women with the difficult task of deciding how much of their career objectives they are willing to sacrifice through cutting back on hours and responsibilities compared with how much of family life they are willing to compromise such as postponing having children, having fewer children and spending less time with partners, relatives and any children they do have (Poole 2011, 141). Men also struggle to achieve a work life balance as they work longer hours than women do and often express discontent with the amount of time they are able to bond with their partners (Poole 2011, 141). However, fathers and father figures today are spending more time with children than in previous times in history, although this time is mostly spent on playing and recreational activities as opposed to the caregiving duties typically carried out by the mother (Saggers and Simms 2004, 71). ...read more.

Additionally, the depth and significance of pre-existing family relationships can also be confirmed and demonstrated in these situations when interaction with each other is an active choice that requires the desire and efforts of both parties to stay in tact (Poole 2011, 137). Conclusion Evidently, the demographic and social changes experienced throughout modern history in Australia have resulted in the popularity and acceptance of a wide range of diverse family structures and compositions. An aging population, lower fertility rates and a more open minded and liberated society have stemmed the gradual swing from the once normative nuclear family. Women?s entry into the workforce, rising divorce rates and an increased standard and cost of living have further occasioned changes to the functioning of the modern Australian family. The need for intimate and close relationships is as significant as ever, however partnerships are often shorter in length and family relationships are burdened with additional obstacles to deal with. ________________ Reference List: Baker, Maureen. 2001. Families, Labour and Love. Sydney: Allen and Unwin. Briggs, Freda. 1994. ?The Changing Family?. In Children and Families: Australian Perspectives, edited by Freda Briggs, 1-16. Sydney: Allen and Unwin. Poole, Marilyn. 2011. ?Families and Intimate Relationships?. In Public Sociology: An Introduction to Australian Society, edited by John Germov and Marilyn Poole, 126-149. Sydney: Allen and Unwin. Saggers, Sherry and Sims, Margaret. ?Diversity: Beyond the Nuclear Family?. In Family: Changing Families, Changing Times, edited by Marilyn Poole, 66-87. Sydney: Allen and Unwin. Alexandra Thurecht | 220078842 Alexandra Thurecht | 220078842 ...read more.