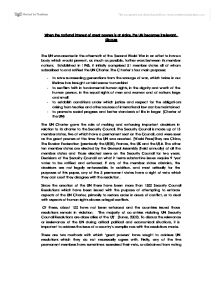 The UN was created in the aftermath of the Second World War in an effort to have a body which would prevent, as much as possible, further wars between its member nations.  Established in 1945, it initially comprised 51 member states all of whom subscribed to and ratified the UN Charter. The Charter’s four main purposes:

The UN Charter gave the role of making and enforcing important decisions in relation to its charter to the Security Council. The Security Council is made up of 15 member states, five of which have a permanent seat on the Council, and were seen as the great powers at the time the UN was created. (World Press)They are China, The Russian Federation (previously the USSR), France, the UK and the USA. The other ten member states are elected by the General Assembly (held annually) of all the member states and those elected serve on the Security Council for two years.
Decisions of the Security Council on what it terms substantive issues require 9 ‘yes’ votes to be ratified and enforced. If any of the member states abstains, the decisions are not legally enforceable. In addition, and most critically for the purposes of this paper, any of the 5 permanent states have a right of veto which they can use if they disagree with the resolution.

Since the creation of the UN there have been more than 1500 Security Council Resolutions which have been issued with the purpose of attempting to enforce aspects of the UN Charter, primarily to restore order in areas of conflict, or to deal with aspects of human rights abuses or legal conflicts.

Of these, about 100 have not been enforced and the countries issued those resolutions remain in violation.  ‘The majority of countries violating UN Security Council Resolutions are close allies of the US’  (Zunes, 2002). To discuss the relevance or irrelevance of the UN during critical political and economical situations, it is important to address the issue of a country’s compliance with the resolutions made.

There are two methods with which ‘great powers’ have sought to address UN resolutions which they do not necessarily agree with. Firstly, any of the five permanent members have sometimes exercised their veto, or abstained from voting on a specific resolution. Secondly, they can vote in favour of the resolutions and do little to enforce them, citing other legalistic or politically confrontational factors for preventing enforcement.

The US has used its veto power frequently and much more than any of the other 5 permanent members. It is practically a given assumption that any attempted resolution which the US sees as undermining the position of Israel will be vetoed.  Similarly, China and Russia have used their veto when national interests are at stake, most recently relating to Burma where China and Russia joined forces in January 2007 and both vetoed a resolution for the first time since the 1970s. (Pederson, 2007: 43)

The record of the UN Security Council relating to the enforcement of its decisions under UN auspices is not encouraging. ‘The only clear-cut example of a collective security enforcement action occurred in Korea in 1950 as a result of a temporary absence of the Soviet Union from the Security Council. Even in 1990, when universal principles and the interests of most of the Great Powers pointed in the same direction with respect to Iraq’s invasion of Kuwait, the coalition that enforced the law acted outside UN control, albeit with the sanction of a Security Council resolution’ (Brown, 2005: 135)

One of the most persistent violations to the authority of the Security Council relates to the Middle East conflict since the 1960s. Numerous Council resolutions were issued and remain outstanding against Israel, which it refuses to enforce on grounds of national interest, and the UN has not sought to use anything other than occasional pressure through subsequent resolutions which ‘urges’ Israel to  adhere to the previous resolutions, most of which have been vetoed by the US.

One of the most commonly referenced UN resolutions is ‘No 242’ which was adopted by unanimous vote of the Security Council in November 1967 following the Six-Day War between Israel and its Arab neighbours (primarily Egypt, Jordan and Syria) earlier the same year. Specifically, it called for:

‘(i) Withdrawal of Israel armed forces from territories occupied in the recent conflict;

(ii) Termination of all claims or states of belligerency and respect for and acknowledgement of the sovereignty, territorial integrity and political independence of every State in the area and their right to live in peace within secure and recognized boundaries free from threats or acts of force’ (UN Security Council, 1971)

This war was started by Israel responding to war threats by the Arab states that misjudged both their own capabilities as well as Israel’s response. Israel claimed its attack on the Egyptian air force was necessary as a pre-emptive move.  In the six days of the war Israel pushed the Arab states back and grabbed a piece of territory from each. Egypt lost the Sinai Peninsula and the Left Bank while Syria lost the Golan Heights and Jordan lost the part of Jerusalem that was under its control.  These three territories effectively gave Israel a buffer against what it perceived as the Arab aggressors. In return for undertakings of peace, the UN voted on Resolution 242 which demanded that Israel withdraws from some of its occupied territories.  None of the states involved accepted the Resolution at first and very little was done to enforce this. Ultimately all the relevant parties accepted 242. Syria, perhaps the most hostile of the Arab states involved, accepted a subsequent Resolution (338) following the Yom Kippur war in 1972 which included adherence to Resolution 242. (Kumaraswamy, 2000: 62)

At the other end of the enforcement spectrum, and with the pretext of wanting to dismantle Iraq’s assumed nuclear weapons capability, the US, UK and Spain invaded Iraq for not complying within less than three months, with SC resolution 1441. These three countries claimed that the invasion was legal as Iraq had not complied with previously issued resolutions, despite the fact that Russia, France and Germany issued a joint declaration stating that such an invasion was neither legal, nor part of the authority of the UN. (UN International, 2003)

Despite numerous diplomatic efforts to maintain a unified stance by the Security Council, it became clear that the US wanted ‘regime change’ in Iraq, as well as the country’s adherence to the previously issued Resolutions. Even though Britain attempted to mediate between the two factions with the Security Council, US President Bush made it clear that he was not going to be held captive by the Council and would act in the interests of the US and the free world, as he saw it. The subsequent invasion of Iraq by the ‘coalition’ of the US, UK and Spain (with the US providing 90%+ of the personnel, hardware and cost)was widely regarded as illegal under existing UN laws (Danchev and Macmillan, 2005: 256). Such a scenario, where the US and its allies act unilaterally may also have been partly a function of the fact that Russia was still emerging from its Soviet era at the time of the crisis, and was not in a position to militarily question the US. As the US did not have a military or political equal at that time, it felt free to act in a manner which suited it, and not necessarily its Security Council co-members.

When in fact no nuclear capability was discovered, the accepted theory was that the US, together with its perennial ally the UK, was protecting or enhancing its own interests in the region since Iraq’s oil reserves are among the worlds largest.

The UN seems to have been more helpful when dealing with less politically charged (usually human rights) issues in countries that are not ‘great powers’. There have been numerous successes in such instances and the resolution of the crisis in countries such as Bosnia, East Timor, Haiti,

Rwanda, Somalia, Biafra and the Congo have generally been successful. (Doyle and Sambanis, 2006:21)Although history in the context of the unenforced Security Council resolutions would suggest that the UN does become irrelevant when the interests of great powers are at stake, it was never created or intended to be the world’s policeman or enforcer. The UN was set up to promote peace and adherence to international law. Whether or not its resolutions were enforced, and by whom, was not specifically part of the original charter.  ‘The UN always was, and remains today, a legal framework for political bargaining’[1] (Foreign Affairs, 2003) It has played a major role through its various agencies in maintaining peace and restoring human rights in areas where war and instability have prevailed, including the Lebanon, Kosovo and even Darfur. An international body made up of diverse ethnic, cultural and religious underpinnings is unlikely to find unanimity in its decision making except in rare circumstances and this was reflected in the UN’s original charter. The failure of the UN to prevent wars should not be seen solely as being symptomatic of its inability to bring parties to the negotiating table successfully, but more a function of its role to provide the framework for countries to resolve their differences under international law.

Charter of the United Nations

Foreign Affairs (2003, July/August) ‘Stayin' Alive: The Rumors of the UN's Death Have Been Exaggerated’ by Edward C. Luck http://www.foreignaffairs.org/20030701faresponse82417/edward-c-luck/stayin-alive-the-rumors-of-the-un-s-death-have-been-exaggerated.html.