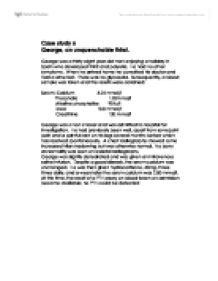 Case study 6 George, an unquenchable thirst. George was a thirty eight year old man enjoying a holiday in Spain who developed thirst and polyuria. He had no other symptoms. When he arrived home he consulted his doctor and had a urine test. There was no glycosuria. Subsequently, a blood sample was taken and the results were obtained: Serum: Calcium 3.24 mmol/l Phosphate 1.20mmol/l Alkaline phosphatise 90 iu/l Urea 10.0 mmol/l Creatinine 150 mmol/l George was a non smoker and was admitted to hospital for investigation. He had previously been well, apart from some joint pain and a painful rash on his legs several months before which has resolved spontaneously. A chest radiography showed some increased hilar shadowing but was otherwise normal. No bony abnormality was seen on skeletal radiographs. George was slightly dehydrated and was given an intravenous saline infusion. Despite a good dieresis, the serum calcium was unchanged. He was then given hydrocortisone, 40mg, three times daily, and a week later the serum calcium was 2.80 mmol/l. At this time, the result of a PTH assay on blood taken on admission became available; no PTH could be detected Introduction George, a 38 years old has presented to his GP with symptoms of thirst, polyuria and dehydration. He has a history of joint pain and a painful rash on his legs. Blood tests were carried out and the results were as follows: Normal levels Outcome Serum: Calcium 3.24 mmol/l 2.25-2.75 mmol/l Increased Phosphate 1.20 mmol/l 0.97-1.45 mmol/l Normal Alkaline phospatise 90 iu/l 30-120 iu/l Normal Urea 10.0 mmol/l 3.6-7.1 mmol/l Increased Creatinine 150 mmol/l 53-106 mmol/l Increased No PTH Detected A chest radiograph revealed an increase in hilar shadowing but no abnormality was present on this radiograph. George was given an intravenous saline infusion as he was dehydrated. This did not affect his serum calcium level and it remained high. Having revealed the blood tests and symptoms the possible outcomes were: Most likely: Hypercalcaemia Hyperparathyroidism Renal impairment Sarcoidosis Vitamin D intoxication Least likely Tumour Metatasis Cancer (lung and renal cells) ...read more.

Decreased serum phosphate levels are indicative of hyperparathyroidism, however, in Georges case these levels are normal. Alkaline phosphatise levels may increase in secondary hyperparathyroidism but not in primary hyperparathyroidism and in Georges case these levels are normal which may possibly lend towards a diagnosis of hyperparathyroidism. Georges levels of phosphate are normal however there is an inverse relationship between calcium and phosphate. Causes When the parathyroid glands secrete too much hormone the balance is disrupted and hypercalcaemia follows. In most people with primary hyperparathyroidism, a benign tumor called an adenoma has formed on one of the parathyroid glands, causing it to become overactive. Treatment � Parathyroidectomy for patients with symptomatic hyperparathyroidism, kidney stones, or bone disease � Bisphosphonates (eg, pamidronate) for acute treatment of severe hypercalcemia while preparing for surgery � For asymptomatic patients: maintain adequate fluid intake and avoid immobilization, thiazide diuretics, and calcium-containing antacids � Estrogen replacement for postmenopausal women Slight renal impairment Hypercalcemia caused by disorders such as sarcoidosis, myeloma, immobilisation and milk-alkali syndrome not infrequently cause acute renal failure. The acute renal effects of hypercalcemia, polyuria, and polydipsia result from renal compensatory mechanisms that increase urinary calcium absorption. Polyuria is caused by a defect in renal tubular function that leads to an inability to conserve water resulting in dehydration, causing polydipsia. Such a defect may relate to excessive calcium levels that alter the kidneys' ability to concentrate urine due to a defect in vasopressin-induced water reabsorption, resulting in polyuria and fluid volume depletion. (Matarese LE, Gottschlich MM, p126, 2003). George displayed polyuria and slight dehydration. While volume depletion and dehydration describe two distinct entities, they can, and often do, occur together. The dehydration caused by polyuria due to the excessive calcium levels accentuates the hypercalcemia because the body attempts to compromise renal function. (Johnson B L, Gross J, p694, 1998). The body strives to preserve water by decreasing the glomerular filtration rate (GFR) ...read more.

Decreased serum phosphate levels are indicative of hyperparathyroidism, however, in Georges case these levels are normal. Alkaline phosphatise levels may increase in secondary hyperparathyroidism but not in primary hyperparathyroidism and in Georges case these levels are normal which may possibly lend towards a diagnosis of hyperparathyroidism. George's levels of phosphate are normal however there is an inverse relationship between calcium and phosphate. Hydrocortisone (glucocorticoid) tablets were given which reduced the serum calcium to 2.80 mmol/l. Glucocorticoids lower calcium levels if there is an increase in vitamin D or there are high levels of calcium which is present in sarcoidosis. Glucocorticoids are usually given to suppress the immune response or suppress inflammation and are of a great value when used to treat conditions that cause hypersensitivity. Cortisol also known as Hydrocortisone is a natural glucocorticoid. When administered orally they are more active comparing to when given by any other route. Receptors for cortisol are found in many tissues; Glucocorticoids inhibit the transcription of the genes for synthesis of cyclooxygenase (c*x-2) This then inhibits cytokine release which leads to a decrease in action of TNFa and interleukins IL-1, IL-2 and IL-5. Glucocorticoids also block the synthesis of arachidonic acid which then inhibits the action of phospholipase A2 therefore reduces the synthesis of prostaglandins. B lymphocyte maturation and T helper lymphocyte profilatation is reduced. Glucocorticoids also decrease histamine release form basophils, decrease IgG production and decrease generation of induced nitric oxide, (Walker, Renwick, Hillier 2001, a). These results show evidence for the proposition that George may be suffering from either Sarcoidosis or Hyperparathyroidism. It is necessary, therefore, to carry out further tests. These tests will serve to either confirm one of the diseases or possibly eliminate the other. In the case of sarcoidosis an increase in the levels of serum angiotensin converting enzyme is indicative of the disease. If this test was carried out it would give a better indication as to the possible diagnosis of Sarcoidosis. To exclude hyperthyroidism serum TSH can to be done. ...read more.