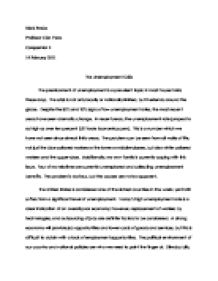 The Unemployment Crisis in the US.

Mark Fetsko Professor Cian Yates Composition 2 14 February 2011 The Unemployment Crisis The predicament of unemployment is a prevalent topic in most house holds these days. The crisis is not only locally or nationally limited, but it extends around the globe. Despite the 80's and 90's signs of low unemployment rates, the most recent years have seen dramatic change. In recent years, the unemployment rate jumped to as high as over ten percent (US Trade Economics.com). This is a number which we have not seen since almost thirty years. The problem can be seen from all walks of life, not just the blue collared workers or the lower or middle-classes, but also white collared workers and the upper-class. ...read more.

The political environment of our country and national policies are who we need to point the finger at. Stimulus bills, handouts, and legislation on Wall Street are simply not creating strong enough work forces, which are desperately needed. Regardless of the many causes of unemployment, there are even more effects from it. For instance, higher crime rates, psychological consequences, and even a low Gross Domestic Product just a few negative effects resulting from high unemployment rates. Economic downturn is not easily reversed because so many individuals do not have money to spend. This drives the supply of goods being produced down, which ultimately impacts revenue, and causes workers to be laid off. Even recent college graduates are feeling the effects. ...read more.

After the great depression, America found its way out of the most devastating collapse of our economic history. President Franklin D. Roosevelt created several programs designed to solve unemployment and perhaps we can learn how to cope as previous generations did in the past. As a creative solution to high unemployment, the United States, as well as other countries could consider utilizing today's technology, by establishing a national database of open jobs, employers, and available employees. This could save time for those looking for work, as well as reducing the time they're collecting benefits. Unemployment agencies could also tighten their job acceptance requirements, which would allow organizations to find the best fitting employee for the job, while cutting back on turnover rates. Finally, improvements on training and education could be a huge advantage to the work force and companies in need of employees. ...read more.