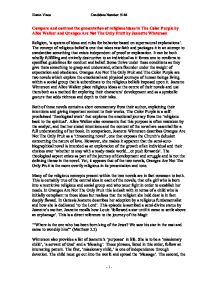 Compare and contrast the presentation of religious ideas in The Color Purple by Alice Walker and Oranges Are Not The Only Fruit by Jeanette Winterson Religion, 'a system of ideas and rules for behavior based on supernatural explanations'. The concept of religious belief is one that takes raw faith and packages it in an attempt to standardize something that exists independent of proof or explanation. It can be both wholly fulfilling and entirely destructive to an individual as it forces one to conform to specified guidelines for conduct and belief. Some thrive under these conditions as they give them something to grasp and understand, others flounder under the weight of expectation and obedience. Oranges Are Not The Only Fruit and The Color Purple are two novels which explore the emotional and physical journeys of human beings living within a social group that is subordinate to the religious beliefs imposed upon it. Jeanette Winterson and Alice Walker place religious ideas at the centre of their novels and use them both as a method for exploring their characters' development and as a symbolic gesture that adds richness and depth to their tales. Both of these novels contain a short commentary from their author, explaining their intentions and giving important context to their works. The Color Purple is a self-proclaimed 'theological work' that explores the emotional journey from the 'religious back to the spiritual'. Alice Walker also comments that this purpose is often mistaken by the analyst, and that her stated intentions and the context of the novel are essential for a full understanding of her book. In comparison, Jeanette Winterson describes Oranges Are Not The Only Fruit as a 'threatening novel', one that exposes the Church's delusion concerning the nature of love. However, she makes it apparent that the semi-auto-biographical novel is intended as an exploration of the growth of an individual and their choices over 'whether to stay with a ready-made world...or push forwards'. ...read more.

Jeanette attributes much of her 'downfall' to 'her weakest point; [her] inability to realise the limitations of [her] sex'. The church, personified by the pastor, subscribes to the teachings of St. Paul, believing that women should not concern themselves with 'the message' (131), nor should they 'wield power on the home front' (131). Winterson presents this religious idea as one to be ridiculed by showing Jeanette to be far more rational and intelligent than virtually the entire church congregation, men included. She challenges the church's binary view of gender and sexuality by showing Jeanette to have understood that someone's value as a person cannot be attributed to their gender or the gender of their lovers, but that 'to the pure all things are pure.' (103) In The Color Purple, Alice Walker presents a society where similar but far more aggravated views on the differing gender roles prevail. In her novel, it is these harsh expectations concerning the treatment and position of women that are shown to lead to Celie's betrayals by her family and her subsequent deviation from the accepted religion of her society. Her Pa is presented as someone who is cruel, domineering and abusive towards the women in his life, seeing them as little more than toys for his pleasure. In Celie's first letter to God, his violation of her is described in detail: 'You gunna do what you mammy wouldn't...He start to choke me, saying You better shut up and git used to it' This attitude and behavior prevalent in Celie's society is presented as having originated from the restrictive and mistaken concept that God is man and as such gives men a mandate over women, the power to treat them as they will. Celie describes an incident when she was beaten 'because [she] winked at a boy in church' (letter 5). For her, the church becomes an increasingly destructive force and this is represented by recollection of negative occurrences that are in some way linked to physical attendance at church; the death of Albert's first wife, 'kilt by her boyfriend coming home from church' (letter 4) ...read more.

(165) Walker's tale is undoubtedly the happier of the two. Celie finds happiness and resolution through her God and is able to accept her past as just that: the past. Winterson does not grant Jeanette this freedom. In her new found reliance upon herself she turns to an absent other, seeking someone to complete her. 'Time is a great deadener. People forget, get bored, grow old, go away...history is a string full of knots...a hammock for swinging and a game for playing.' (166) Jeanette cannot forget her past and the betrayals she faced. For her, the past is the undead; something which should have been laid to rest but keeps mutating through the efforts of humanity. Both Walker and Winterson have used the power of God, in its many forms, to inspire and mutate their protagonists. For Celie, this change is a demonstrable improvement, a righting of wrongs. For Jeanette, any improvement is a matter for debate. Winterson presented her with walls; her mother's beliefs and hypocrisy, the church's teachings and her own religion. She creates a 'Forbidden City' (110) in an attempt to understand these walls, and realises that it is 'in the nature of walls that they should fall' (110). In the place of these metaphysical walls she draws a 'chalk circle...for the soul' (111), but is this circle any less limiting? She remains trapped in a cage of her own 'needs' (165). Winterson uses this concept of cages and walls, circles and souls, to epitomise the spiritual struggle her character faces. All of the religious ideas used to describe this struggle can be reduced to this one concept. For Walker, it is colour that exemplifies her character's spiritual evolution. Celie rids herself of restriction to nondescript colours, 'brown, maroon or navy blue' (letter 12) and her search for 'somethin' purple' (letter 12) is complete when she realises she can 'walk by the color purple in a field somewhere' (letter 73), notice it and please God. ?? ?? ?? ?? Elanin Vince Candidate Number: 9166 - 1 - ...read more.