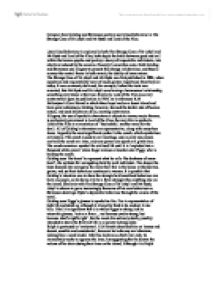 Compare how Golding and Stevenson portray uncivilised behaviour in The

Compare how Golding and Stevenson portray uncivilised behaviour in The Strange Case of Dr Jekyll and Mr Hyde and Lord of the Flies. Uncivilised behaviour is explored in both The Strange Case of Dr Jekyll and Mr Hyde and Lord of the Flies; both depict the battle between good and evil within the human psyche and portray a decay of respectable individuals, into rebellion induced by the erosion of society's unwritten rules. Both Golding and Stevenson use allegory to present this change in behaviour, and thus to convey the central theme in both novels, the duality of mans nature. The Strange Case of Dr Jekyll and Mr Hyde was first published in 1886, when reputation and respectability were of much greater importance than they are today. It was commonly believed, for example, before the twist was revealed, that Mr Hyde and Dr Jekyll were having a homosexual relationship, something very taboo at the time. Similarly, Lord of the Flies was very controversial upon its publication in 1954, as it references R.M Ballentyne's Coral Island in which three boys land on a desert island and have great adventures. Golding, however, showed the darker side of human nature, and used children to do so, creating controversy. Allegory, the use of symbolic characters or objects to convey major themes, is particularly prominent in Lord of the Flies, the very title is symbolic. Lord of the Flies is a translation of 'Beelzebub', another name for the devil. All of Golding's characters are representative, along with many key items. Arguably the most significant symbol is the conch, which symbolises civilisation. The conch is used to call meetings, and, as only one person can hold the conch at a time, only one person can speak at a given time. The conch remains a symbol for civilised life until it is 'exploded into a thousand white pieces' when Roger releases a boulder onto Piggy, who is holding the conch. ...read more.

Of all the main characters, Golding shows the swiftest move towards uncivilised behaviour through Jack, and he is shown throughout the novel to clash with Ralph, leading to a climax in the closing chapter, in which Jacks savage tribe seek out and decapitate Ralph, shown through the use of the vague 'a stick sharpened at both ends', only being prevented by the arrival of a naval officer to restores civilisation. Dr Lanyon is another of Jekyll's close friends, described by Stevenson as a 'hearty, healthy, dapper, red-faced gentleman' whose 'geniality...was somewhat theatrical to the eye', Lanyon is much more concerned with reputation than Utterson, having already had scientific disagreements with Jekyll, referring to his experiments as 'fanciful'. In the chapter entitled Dr Lanyon's Narrative, Stevenson describes Lanyon as 'shaken to the roots' by his witnessing of Jekyll's transformation. This new knowledge goes against all that he thought he knew, so much so it lead to his slow disintegration in health, and then death. It could be argued that Stevenson was intending to provide a character to which the audience could relate. As many audiences, particularly in the Victorian era in which the book was published, would be shocked by Hyde's behaviour, much in the way that Lanyon was. Golding shows Simon to be good-natured and insightful, and critics often regard him as a prophet as his concern for others eventually leads to his murder. It is Simon who discovers the 'beast' is in fact a dead parachutist. It is when he tries to report this news that he stumbles into the circle becoming 'the beast'. I think Golding used Simon perhaps as a counter for the appalling behaviour exhibited by the other characters throughout the novel, similarly to Simon. Golding once said himself in interview when discussing his time served in the Second World War; 'I did have some airy-fairy views about man. But I went to war, and that changed me'. ...read more.