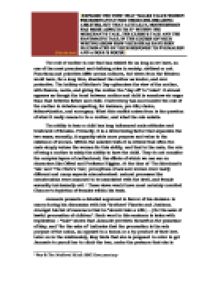 EXPLORE THE VIEW THAT MALES VALUE WOMEN PREDOMINANTLY FOR THEIR CHILDBEARING ABILITIES, BUT THAT ACTUALLY, MOTHERHOOD HAS MORE ASPECTS TO IT WITHIN THE MERCHANTS TALE, THE CLERKS TALE AND THE HANDMAIDS TALE

The role of mother is one that has existed for as long as we have, as one of the most prominent and defining roles in society, civilised or not. Functions and priorities differ across cultures, but views from the Western world have, for a long time, idealised the mother as tender, and over protective. The holiday of Mother's Day epitomises the view of the mother, with flowers, cards, and giving the mother the "day off" to "relax". It almost appears as though the bond between mother and child is somehow stronger than that between father and child. Controversy has surrounded the role of the mother in debates regarding, for instance, pro-life/choice, fathers4justice, and surrogacy. What this conflict arises from is the question of what it really means to be a mother, and what the role entails. The ability to bear a child has long influenced male attitudes and treatment of females. Primarily, it is a determining factor that separates the two sexes; secondly, it arguably adds more purpose and value to the existence of women. Within the selected texts it is evident that often the male simply values the woman for this ability, and that to the male, the role of being a mother is solely the ability to have the child. They do not consider the complex layers of motherhood; the effects of which we can see on characters like Offred and Professor Higgins. At the time of 'The Merchant's Tale' and 'The Clerk's Tale', perceptions of sex and women were vastly different and many aspects misunderstood: natural processes like menstruation were assumed to be associated with the devil, and female sexuality intrinsically evil.1 These views would have most certainly moulded Chaucer's depiction of females within his texts. Januarie presents a detailed argument in favour of his decision to marry during his discussion with his "brothers" Placebo and Justinus. Amongst his list of reasons is that he "should take a wife [...] for the sake of lawful procreation of children". ...read more.

She succinctly explains this when she claims, "A man is just a woman's strategy for making other women." She criticises Offred and Luke as unappreciative, and she has ended up bitter that her protesting has not produced action in the next generation. Offred retells the scene of her mother crying quite passively - she doesn't introduce any overtones of pity or remorse for the way things were between them, she simply remarks, "I admired my mother in some ways, although things between us were never easy. [...] I didn't want to live my life on her terms". Offred's mother may be disappointed in Offred, but it is evident that she has taught Offred to think for herself, and that actually Offred's apparent submission/quiet subversion is arguably more effective than her mother's brash resistance - seen in the fate of her mother and Moira. Moira's similarities to Offred's mother, and Offred's longing for their reunion - "I want her back" - is arguably what gives birth to the friendship between the two women. Offred, ironically, appears to reject the pre-Gileadean feminism propagated by her mother. Offred is a character that seems to decide on the admirable characteristics of the people that surround her - her mother, Moira etc, and draw them all into one personality - her own. She has none of the excessiveness of these people. Offred digs at her mother by saying, "I am not your justification for existence", again tangling the role of the mother, giving birth and its relation to the raising of a child. IS having a child justification for the existence of a woman? It certainly is in The Handmaid's Tale, and it is partly in 'The Merchant's Tale', alongside sexual enjoyment. Offred, ironically and arguably, comes closer to her mother in her absence, because her existence within Gileadean society leads to her understanding her mother's feelings more and more. Her slight rebellions and subversions are Offred's way of remembering and honouring her mother: "I've mourned for her already. ...read more.

The focus is clearly on the pregnancy aspect as opposed to 'The Merchant' and Clerk's Tales, written by males with comparatively little on the aspect of childbirth - far more on the ideas of sexual attraction. This would lead me to conclude that the complexity of motherhood and the capacity for variation within the role of mother is greatly underestimated by many male characters. Motherhood is undoubtedly a fulfilling and unique role, and if asked to list the differences between the sexes, that ability to give birth would be unavoidable. But this should not mean that the role of motherhood is only valued as this physical capability. These character analyses of Offred and Higgins' mothers show the immeasurable effect that mothers have on the characters and their behaviour, whether they are similar to the parents or not. The different societies lived in by the authors has also skewed the perceptions or opinions of women and the ability to give birth, and Atwood is correct in remarking that the journey away from the commoditisation of women and child birthing is of arguable distance. 1 Sex & The Medieval Mind: BBC Documentary 2 http://www.catholicbible101.com/themaryverses.htm 3 Alanna A Callaway: 'Women disunited: Margaret Atwood's The Handmaid's tale as a critique of feminism' http://scholarworks.sjsu.edu/cgi/viewcontent.cgi?article=4501&context=etd_theses&seiredir=1&referer=http%3A%2F%2Fwww.google.co.uk%2Furl%3Fsa%3Dt%26rct%3Dj%26q%3Dfeminist%2Breadings%2Bthe%2Bhandmaids%2Btale%26source%3Dweb%26cd%3D5%26ved%3D0CEkQFjAE%26url%3Dhttp%253A%252F%252Fscholarworks.sjsu.edu%252Fcgi%252Fviewcontent.cgi%253Farticle%253D4501%2526context%253Detd_theses%26ei%3DVVmaT9jZEYqj4gSG7fDmDg%26usg%3DAFQjCNFiko6_LYcBW0EXnkp6aKMGHOvUtA#search=%22feminist%20readings%20handmaids%20tale%22 4 'Thoughts After Ruskin' by Elma Mitchell 5 Revisiting The Handmaid's Tale: Feminist Theory Meets Empirical Research on Surrogate Mothers http://robsonhall.ca/faculty_public_data/images/stories/s%20Tale%20cjfl.pdf 6 Mother & Baby and Tesco Baby & Toddler Club survey on modern motherhood 2012 7 Custodial Mothers and Fathers and their child support - US Census Bureau (http://www.census.gov/prod/2009pubs/p60-237.pdf) ?? ?? ?? ?? [Pick the date] [EXPLORE THE VIEW THAT 'MALES VALUE WOMEN PREDOMINANTLY FOR THEIR CHILDBEARING ABILITIES, BUT THAT ACTUALLY, MOTHERHOOD HAS MORE ASPECTS TO IT' WITHIN THE MERCHANT'S TALE, THE CLERK'S TALE AND THE HANDMAID'S TALE. IN THE COURSE OF YOUR WRITING SHOW HOW YOUR IDEAS HAVE BEEN ILLUMINATED BY YOUR RESPONSE TO PYGMALION AND A DOLL'S HOUSE.] ...read more.