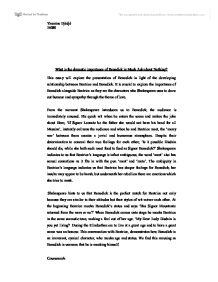 The dramatic importance of Benedick

What is the dramatic importance of Benedick in Much Ado about Nothing? This essay will explore the presentation of Benedick in light of the developing relationship between Beatrice and Benedick. It is crucial to explore the importance of Benedick alongside Beatrice as they are the characters who Shakespeare uses to draw out humour and sympathy through the theme of love. From the moment Shakespeare introduces us to Benedick, the audience is immediately amused. His quick wit when he enters the scene and makes the joke about Hero; 'If Signor Leonato be the father she would not have his head for all Messina', instantly enlivens the audience and when he and Beatrice meet, the 'merry war' between them creates a jovial and humorous atmosphere. Despite their determination to conceal their true feelings for each other; 'Is it possible Disdain should die, while she hath such meet food to feed as Signor Benedick?' Shakespeare indicates to us that Beatrice's language is infact ambiguous, the word 'meet' also has sexual connations as it fits in with the pun 'meat' and 'mate'. The ambiguity in Beatrice's language indicates us that Beatrice has deeper feelings for Benedick; her insults may appear to be harsh, but underneath her rebellion there are emotions which she tries to mask. Shakespeare hints to us that Benedick is the perfect match for Beatrice not only because they are similar in their attitudes but their styles of wit mirror each other. ...read more.

Although this clich� is completely transformed into a satire, it is because of Claudio's lack of witticism that we are able to see the jocularity in Benedick jokes. Shakespeare uses Claudio as a foil to emphasize the irony of Benedick's joke. Shakespeare makes it clear to us that Hero and Claudio are 'ideal' couple, he presents Hero as a timid, obedient young woman who accepts the identity forced on woman by men in Shakespeare's day. Hero's character can be an admirable character for her graciousssness and innocence however the way in which she arouses our interest is not in the same way as Beatrice. Unlike Beatrice who is confident and outspoken, Hero is shy and reserved. We become aware of this lack of confidence in Hero when she has to be told by Beatrice; 'Speak cousin; or if you cannot, stop his mouth with a kiss...' Throughout the play Shakespeare juxtaposes Hero and Claudio against Beatrice and Benedick to draw out the humour and irony in their jokes. Hero and Claudio enable us to gain insight into the follies of love. Towards the end of the play we see through the theme of deception how Benedick is tricked into marriage against his heart as he overhears himself being criticised by his friends in the garden: 'This can be no trick' The repetitive use of 'I' in Benedick's soliloquy allows the audience to gain sight into Benedick's thoughts. ...read more.

Their relationship is the embodiment of both the struggles and the pleasures of love. They are aware of the realities of love as they have been their before; 'I know you of old' Benedick knows that a married man must risk his honour by entrusting it to a woman while Beatrice knows that she must put integrity at risk by submitting herself to a man. On the other hand, although they both manipulated into falling in love, Shakespeare illustrates that they can not settle into the language of conventional lovers. Towards the close of the play Benedick finds it difficult to compose a sonnet; 'I mean in singing but in loving' and Beatrice even admits that Benedick is 'to wise to woo peaceably'. Through Benedick Shakespeare celebrates that love is not just poetry and clich�s but that it is complex, and can also be plain and boring like prose. Benedick is the protagonist that embodies the themes of love, trust, honour deception, status and language. His career from scorner, mocker to lover shows that alongside Beatrice he is the character who forms the framework of the play as 'Much Ado about Nothing' is based on these themes. Benedick is greatly admired by the audience by the way he demonstrates his emotions through language. He is a 'weak' character when it comes to love but he is also a strong character because he uses his own logic to accept love into his heart. For me, Benedick's, character demonstrates the qualities of a 'real man'. ?? ?? ?? ?? Yasmine Dj�dj� 14080 Coursework ...read more.