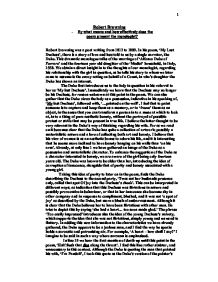 By what means and how effectively does the poem present the monologist?

Robert Browning - By what means and how effectively does the poem present the monologist? Robert browning was a poet writing from 1812 to 1889. In his poem, 'My Last Duchess', there is a story of love and loss told to us by a single narrator, the Duke. This dramatic monologue talks of the marriage of 'Alfonzo Duke of Ferrara' and the fourteen year old daughter of the 'Medici' household, in Italy, 1558. We obtain a direct insight in to the thoughts of our monologist, regarding his relationship with the girl in question, as he tells his story to whom we later come to assume is the envoy acting on behalf of a Count, in who's daughter the Duke has shown an interest. The Duke first introduces us to the lady in question in his referral to her as 'My last Duchess'. Immediately we learn that the Duchess may no longer be his Duchess, for reason unknown at this point in the poem. We can also gather that the Duke views the lady as a possession, indicative in his speaking of, 'My last Duchess', followed with, '...painted on the wall'. ...read more.

In 'Porphyria's lover', Browning gives the implication that Porphyria is of higher class than her lover, through the idea of dress, i.e. 'Withdrew the dripping cloak... hair fall', creating an even more defined difference by creating the idea that Porphyria has been to a social dinner before returning to lover, 'Nor could tonight's gay feast restrain.' The Duke is honest at one particular point in the poem, (lines 35-39), when he says to the envoy, 'Even had you skill in speech... the mark.' Here he is saying that he did not have the lingual skills to voice his 'disgust' to her or to say that he found her behaviour difficult, but even if he had been able to do so, he had decided not to 'stoop', or to relent, thus making it unlikely that there would have been change in the final outcome of their relationship. The Duke makes regular referral to his wife's behaviour with other men, 'Oh sir, she smiled, no doubt, Whene'er I passed her; but who passed without Much the same smile', implying that yes, his wife did smile at him, but she smiled at everyone in the same manner. ...read more.

The mixture of written technique used throughout this dramatic monologue adds irony to the poem, in that the Duke seems to be controlling and craves masculinity, but the caesura used is representative of the anxiety he feels whilst talking about the deceased Duchess, though we presume he was mentally fit to kill her. The poem presents the monologist as a possessive and jealous man who craves control, although I feel that because the Duke is talking to an individual whom he hopes will help him in his pursuit of this next wife, the information he is giving may be a 'clean' version of the true sequence of events that have been manipulated to ensure he does not come off badly. This idea is supported by his constant referral to her 'flirtatious' behaviour, though I find it hard to believe a girl between the ages of fourteen and seventeen, (her age of death), would flirt in such a provocative way in which she was described. As a Duke he would not want to risk his reputation or his chance of attaining what he has been aspiring for - a new wife, as whom he has chosen the daughter of the Count of Tyrell. A marriage that would prove prosperous in both his reputation and affluence. 1 ...read more.