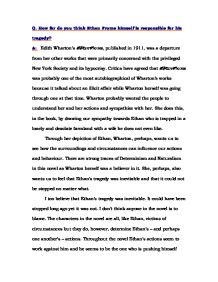 How far do you think Ethan Frome himself is responsible for his tragedy?

Q. How far do you think Ethan Frome himself is responsible for his tragedy? A: Edith Wharton's Ethan Frome, published in 1911, was a departure from her other works that were primarily concerned with the privileged New York Society and its hypocrisy. Critics have agreed that Ethan Frome was probably one of the most autobiographical of Wharton's works because it talked about an illicit affair while Wharton herself was going through one at that time. Wharton probably wanted the people to understand her and her actions and sympathize with her. She does this, in the book, by drawing our sympathy towards Ethan who is trapped in a lonely and desolate farmland with a wife he does not even like. Through her depiction of Ethan, Wharton, perhaps, wants us to see how the surroundings and circumstances can influence our actions and behaviour. There are strong traces of Determinism and Naturalism in this novel as Wharton herself was a believer in it. She, perhaps, also wants us to feel that Ethan's tragedy was inevitable and that it could not be stopped no matter what. I too believe that Ethan's tragedy was inevitable. It could have been stopped long ago yet it was not. I don't think anyone in the novel is to blame. The characters in the novel are all, like Ethan, victims of circumstances but they do, however, determine Ethan's - and perhaps one another's - actions. Throughout the novel Ethan's actions seem to work against him and he seems to be the one who is pushing himself backwards. Perhaps this was because of the author's belief in Naturalism and the effect of nature and the surroundings on human nature. We see in the novel that Ethan's actions, however noble, always seem to backfire. This gave me the idea that he, probably, was destined for his misfortune and that nothing could prevent it. To begin with, Ethan was studying in a college in Worcester on his way to become an engineer. ...read more.

His marriage to Zeena was doomed from the beginning as all loveless marriages are. It was brought about by an 'unreasoning dread of be left alone on the farm' With Zeena he probably made the biggest mistakes of his tragic life. Zeena has, from the beginning, been portrayed as a sly and nasty woman. The descriptions of Zeena are harsh and unfeeling and convey a sense of extreme coldness and are almost always sickly - 'her puckered throat' and 'high-boned face'. We see no signs of any passion for her husband or, for that matter, anyone else. Instead she resents Ethan for being so poor. Yet when Ethan thinks of moving to better prospects in a bigger city Zeena refuses, knowing that she will be a no-body there. The thought of this forces them to live their lives in discontentment. Already here we see how Zeena has started to work against Ethan. She holds him back in many ways. However I don't think that Zeena does this on purpose. She, like Ethan, is, also perhaps, a victim of circumstances and she too doesn't have the power to change her situation. The lack of love in their marriage proves to be another factor that coerces Ethan into his tragic end. Neither Ethan nor Zeena make any effort to render their marriage happy. They both seem content to live in their own little worlds speaking only when spoken to or, in Zeena's case - to complain. 'When she spoke it was only to complain...of things not in power of his remedy.' This is quite a departure from Ethan's previous descriptions of her where her voice was 'music in his ears' and the 'she laughed at him' because of his lack of competence around the house. I think this change in Zeena was more or less because of her environment. Zeena's cheeriness was drained away by the land. ...read more.

For example he listens to Zeena when she refuses to go with him and settle in a bigger city and to Mrs. Hale when she talks about him having a hard life and how he should be proud of his doings. Lastly and most importantly he listens to Mattie when she decides that they should commit suicide. He does not take charge of any of these situations and they in the end force him into doing the things he would not have done if he were a stronger person. I cannot help but think that, maybe, Ethan's tragic end was not so inhuman and cruel. I feel that it was a sinister type of poetic justice; that Ethan probably deserved what he got because he was wrong for not doing anything about his circumstances. There was actually a lot Ethan could have done to change his situation and make life better. Yet he lacks the strength to do so - the strength to escape from the harsh realities of his life. His actions, of not grabbing opportunities to escape from this life when they come are distressing. That is why I feel that maybe his life with Zeena and the paralysed Mattie are a sort of punishment for this. 'If she'd ha' died, Ethan might ha' lived.' However, I still to feel that Wharton has presented this character beautifully and in a very believable manner. She managed to draw my sympathy for Ethan and his situation. She skilfully uses the settings to explain the turmoil going on in Ethan's mind. His character is one of the most noble I have seen as he rises above his fears and realities to help other people. He appeals to the sorrows and grief that we face every day. I don't feel that he was completely responsible for his Fate. In the end everyone is responsible for his or her actions and deeds yet there are some things that you just cannot change and, perhaps, Ethan Frome's life was filled with much of the latter. ...read more.