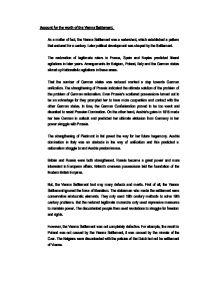 Account for the worth of the Vienna Settlement. As a matter of fact, the Vienna Settlement was a watershed, which established a pattern that endured for a century. Later political development was shaped by the Settlement. The restoration of legitimate rulers in France, Spain and Naples predicted liberal agitations in later years. Arrangements for Belgium, Poland, Italy and the German states stirred up Nationalistic agitations in these areas. That the number of German states was reduced marked a step towards German unification. The strengthening of Prussia indicated the ultimate solution of the problem of the problem of German nationalism. Even Prussia's scattered possessions turned out to be an advantage for they prompted her to have more cooperation and contact with the other German states. ...read more.

France no longer threatened European peace. The measures to maintain Balance of Power were successful. The influence of the Bourbon was balanced by that of the Hapsburgs. Austria was balanced by Prussian in the German Confederation. France was preserved as a Great Power. Thus, no country could be a super-power. All in all, the cooperatives spirit and the settlement of the ambassadorial procedure established a system of international diplomacy that lasted throughout the 19th century and beyond. Thought the Congress System lapsed after 1825 the concert of Europe did exert a beneficial influence on European affairs at certain points until 1870. A blueprint had been found which was to be more fully developed after 1919. The idea of the concert of Europe was the precursor of the League of Nations and laid the germ of future international government. Username: b0011222 ...read more.