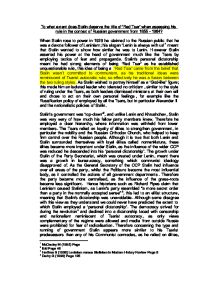 To what extent does Stalin deserve the title of Red Tsar when assessing his rule in the context of Russian government from 1855- 1964?

To what extent does Stalin deserve the title of 'Red Tsar' when assessing his rule in the context of Russian government from 1855- 1964? When Stalin rose to power in 1929 he claimed to the Russian public that he was a devote follower of Leninism; his slogan 'Lenin is always with us'1 meant that Stalin wanted to show how similar he was to Lenin. However Stalin asserted his power at the head of government much like the Tsars by employing tactics of fear and propaganda. Stalin's personal dictatorship meant he had strong elements of being 'Red Tsar' as he established unquestionable rule, this idea of being a 'Red Tsar' came from the belief that Stalin wasn't committed to communism, as his traditional ideas were reminiscent of Tsarist autocratic rule, so effectively he was a fusion between the two ruling styles. As Stalin wished to portray himself as a 'God-like' figure; this made him an isolated leader who tolerated no criticism, similar to the style of ruling under the Tsars, as both leaders dismissed ministers at their own will and chose to act on their own personal feelings, for example like the Russification policy of employed by all the Tsars, but in particular Alexander II and the nationalistic policies of Stalin. Stalin's government was 'top-down'2, and unlike Lenin and Khrushchev, Stalin was very wary of how much his fellow party members knew. Therefore he employed a clear hierarchy, where information was withheld from lower members. The Tsars relied on loyalty of �lites to strengthen government, in particular the nobility and the Russian Orthodox Church, who helped to keep firm control over the Russian people. Although it is true that both Lenin and Stalin surrounded themselves with loyal �lites called nomenklatura, these �lites became more important under Stalin, as the influence of the wider CCP was reduced he descended into his 'personal dictatorship'. The growth under Stalin of the Party Secretariat, which was created under Lenin, meant there was a growth in bureaucracy, something which communist ideology disapproved of. ...read more.

Stalin used a regime of Terror to stay in power much like the Tsars, but his creation of a highly centralised state means that historians such as Schapiro hold Stalin personally responsible for high levels of human suffering24 during his rule. Furthermore Robert Conquest claims that "the Great terror emanated from the top", he claims that "Stalin planned the purges, directed the NKVD and organised the apparatus of terror, to control his own party as much as the country".25 Whereas J. Arch Getty claims "the Cold War distorted the western view of the Soviet Union" and we "must distance Stalin from sole responsibility"26 for the horrors of the Great Terror. Getty claims that Stalin had no plans the Terror experienced in the Soviet Union at this time, and despite his position of power his personality faults do not help to explain what happened, in fact Stalin may have not even known what was going on. Getty also claims that officers in the NKVD acted on their own will, due to chaos of the Soviet Union and fear of Stalin's temper. Getty claims that the randomness of attacks and irrational fear within the population, shows that there was a lack of tight central control. Getty's view is extreme, because although the scale of the terror, thoroughness of targeting and executions can be partly put down to a tumult within the Soviet Union at this time, Stalin must still be regarded as a deeply suspicious character, who saw enemies everywhere, therefore he must be more than partially responsible. Consequently the most convincing view is that Stalin was not solely responsible for the Terror experienced, but that his position within the country meant he knew the majority of what was happening and exercised significant power over the NKVD. The atrocities experienced did not happen without a great deal of central orchestration because the sheer scale, cannot simply be put down to civil unrest. ...read more.

This is a thorough and well-structured exploration, which is supported by a great deal of research and comes to a strong conclusion. A little more evidence is needed to prove points in places but this more than answers the question and is convincing. 5 out of 5 stars.