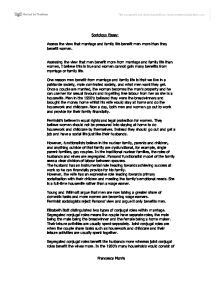 Assess the view that marriage and family life benefit men more than they benefit women.

Sociology Essay: Assess the view that marriage and family life benefit men more than they benefit women. Assessing the view that men benefit more from marriage and family life than women, I believe this is true and women cannot gain many benefits from marriage or family life. One reason men benefit from marriage and family life is that we live in a patriarcle society, male dominated society, and what men want they get. Once a couple are married, the woman becomes the man's property and he can use her for sexual favours and is getting free labour from her as she is a housewife. Men in the 1950's believed they were the breadwinners and brought the money home whilst his wife would stay at home and do the housework and childcare. Now a day, both men and women go out to work and provide for their family financially. Feminist's believe in equal rights and legal protection for women. ...read more.

He used to beat her every other day and lock her in the house for hours. He received six life sentences for his actions. Police will now intervene against domestic violence, whereas in the 1950's they wouldn't respond to any calls of domestic violence because the woman was seen to be the man's property and their family life was private. Dobash and Dobash researched in Scotland, based on police and court records and interviews with women in women's refuges. They mentioned being slapped, kicked, raped or killed by their partners. Dobash and Dobash found that violent incidents could occur by what a husband sees as a challenge to his authority such as his wife asking why he was late home for a meal. In conclusion, I believe men do benefit more from marriage and family life than women. Men are seen as breadwinners and gain control and power from marriage and family life. Wives are seen as a weak housewife in which belongs to their husband. Women would never have as many benefits to marriage and family life than men do now in a patriarcle society. Francesca Morris ...read more.