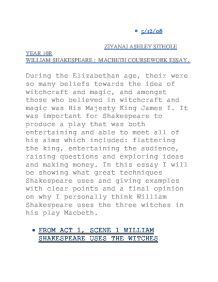 * 5/12/08 ZIYANAI ASHLEY SITHOLE YEAR 10R WILLIAM SHAKESPEARE : MACBETH COURSEWORK ESSAY. During the Elizabethan age, their were so many beliefs towards the idea of witchcraft and magic, and amongst those who believed in witchcraft and magic was His Majesty King James I. It was important for Shakespeare to produce a play that was both entertaining and able to meet all of his aims which included: flattering the king, entertaining the audience, raising questions and exploring ideas and making money. In this essay I will be showing what great techniques Shakespeare uses and giving examples with clear points and a final opinion on why I personally think William Shakespeare uses the three witches in his play Macbeth. * FROM ACT 1, SCENE 1 WILLIAM SHAKESPEARE USES THE WITCHES BECAUSE OF THE FOLLOWING FIRST, THREE POINTS: The First point for why William Shakespeare used the witches in his play Macbeth is because the witches are fearless. I can support this point with the following evidences "When shall we three meet again? In thunder, lightning, or in rain?" - Evidence captured from Act 1, Scene 1 lines 1 & 2 of play. ...read more.

to get Macbeth to the right direction they wanted him to be in, Which is being king and by them giving him the idea to get the throne, he is focused on that and therefore they are controlling him and everyone involved in Macbeth`s life which is controlling the play. In conclusion William Shakespeare uses the witches in his play Macbeth because of various reasons that include: the fact that they have good magical abilities, also they are united in what they do and that they interfere in Macbeth's private life. But in my opinion I personally feel that the main reason for why Shakespeare includes the witches in his play is because they control the play. Although it doesn't seem that way Shakespeare made the witches capable to do anything, and one thing their capable of doing was to control Macbeth and by predicting what will happen, they are guarding him to follow what the witches want Macbeth to do. And as his wife acting as a fourth witch, it was hard for Macbeth to resist the temptation therefore making the witches stronger than Macbeth and the story more interesting to the audience. Essay by ziyanai Ashley sithole YR 10R ?? ?? ?? ?? ...read more.