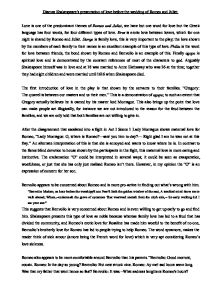 Discuss Shakespeare's presentation of love before the wedding of Romeo and Juliet. Love is one of the predominant themes of Romeo and Juliet, we have but one word for love but the Greek language has four words, for four different types of love. Eros is erotic love between lovers, which for one night is shared by Romeo and Juliet. Storge is family love, this is very important to the play; the love shown by the members of each family to their names is an excellent example of this type of love. Philia is the word for love between friends, the bond shown by Romeo and Benvolio is an example of this. Finally agape is spiritual love and is demonstrated by the constant references of most of the characters to god. Arguably Shakespeare himself was in love and at 18 was married to Anne Hathaway who was 26 at the time; together they had eight children and were married until 1616 when Shakespeare died. The first introduction of love in the play is that shown by the servants to their families. "Gregory: The quarrel is between our masters and us their men." This is a demonstration of agape; to such an extent that Gregory actually believes he is owned by his master lord Montague. This also brings up the point that love can make people act illogically, for instance we are not introduced to the reason for the feud between the families, and we are only told that both families are not willing to give in. ...read more.

used to give to her family onto Juliet we can see this because she remembers some of Juliet's first steps and says she shall not forget it for "a thousand years". From this passage we can also see that Juliet is only fourteen whereas previously we are told that Romeo is in his late teens so is considerably older than Juliet, this difference in age makes the reader consider that Romeo may be taking advantage of Juliet. In Act 1 Scene 4 Mercutio describes love as acting out of character, "Mercutio - O, then, I see Queen Mab hath been with you. ... And in this state she gallops night by night Through lovers' brains, and then they dream of love; ... True, I talk of dreams, Which are the children of an idle brain, Begot of nothing but vain fantasy; Which is as thin of substance as the air, And more inconstant than the wind, who wooes Even now the frozen bosom of the north, And, being anger'd, puffs away from thence, Turning his face to the dew-dropping south." In this passage Mercutio uses Queen Mab as a metaphor for unusual deeds. It also shows an uncommonly presented view of love at first sight, describing it as acting out of character and parallels it to priests wishing for more money. ...read more.

The friar must have been aware that it is quite possible that this hasty marriage could ruin both Romeo and Juliet's lives; however he sees that an "alliance" or marriage between the two households of Capulet and Montague might end the feud that has divided Verona for years. Following this Nurse comes to see Romeo and shows concern for Juliet. "Nurse - but first let me tell ye, if ye should lead her into a fool's paradise, as they say, it were a very gross kind of behaviour, as they say: for the gentlewoman is young; and, therefore, if you should deal double with her, truly it were an ill thing to be offered to any gentlewoman, and very weak dealing." This shows that Nurse is aware of the vulnerability of her charge and shows an almost motherly concern for her. In conclusion it appears that the subject of Love is a major component of the first two scenes. Multiple facets of love are presented by Shakespeare, but the most prevalent is obviously Romeo and Juliet's romantic love at first sight. Personally I believe that Shakespeare believed this kind of love to be careless and unwise. In contrast family love is blamed for a bloody feud that has torn a whole city apart. Overall love is seen by Shakespeare as being able to cause terrible suffering. However he also shows that it can cause great joy, this is shown by the wedding of Romeo and Juliet which concludes act two. ?? ?? ?? ?? ...read more.

This student written piece of work is one of many that can be found in our GCSE Albert Camus section.