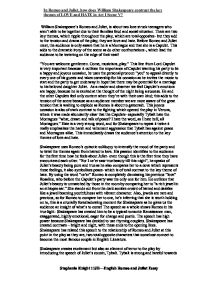 William Shakespeare's Romeo and Juliet, is about two love struck teenagers who aren't able to be together due to their families feud and social situation. There are two key themes, which ripple throughout the play, which are total opposites- but they add to the tension and drama of the play, they are love and hate. Before Romeo and Juliet meet, the audience is only aware that he is a Montague and that she is a Capulet. This adds to the dramatic irony of the scene as do other confrontations-, which lead the audience to be teetering on the edge of their seat! "You are welcome gentlemen. Come, musicians, play." This line from Lord Capulet is very important because it outlines the importance of Capulet wanting his party to be a happy and joyous occasion, he uses the personal pronoun "you" to appeal directly to every one of his guests and takes ownership for his occasion as he invites the music to start and the party to get underway in hope that there may be potential for a marriage to his beloved daughter Juliet. As a reader and observer we feel Capulet's emotions are happy, because he is excited at the thought of the night being a success. He and the other Capulets feel only content when they're with their own kind; this adds to the tension of the scene because as an audience member we are more aware of the great tension that is waiting to explode as Romeo is about to gatecrash. ...read more.

Shakespeare has related this speech to the relationship of Romeo and Juliet at this point in the play as they are, two total opposite characters that somehow connect to become the most famous couple in English Literature. Shakespeare creates excitement but also an element of terror to the play by introducing the speech of Juliet's cousin, Tybalt. Tybalt is strong and hateful towards Romeo, as he is aware that there is one, if not more Montagues present at an all Capulet Ball. By using dialogue such as 'what dare that slave come hither' and 'uncle, this is a Montague, our foe' Shakespeare is able to translate the forceful hate and rivalry, possessed between Tybalt to Romeo and generally the drama and conflict between Capulet and Montague. The word "slave" is quite demeaning and as Tybalt uses this undermining language, he is inferring that Romeo is very much of lower importance than himself. This is very tense for the audience but it is however also very thrilling. Capulet's response to Tybalt is to say that Romeo is a "virtuous and well governed youth", this is an uplifting change to the hatred and aggression which came from Tybalt. Shakespeare has chosen for Capulet to react in rather a peculiar way after Tybalts outcry, by referring to Romeo as "virtuous" he seems to have dismissed the fact he is involved in such a serious dispute and keeps the scene flowing with love and affection. ...read more.

Act 1, Scene 5 is one of, if not, the most important scene in the play, it is very dramatic; because Shakespeare used Capulet's speech to set a contrasting happy mood to that of the beginning of the play, so already this scene was very different. Shakespeare expressed Romeo's declaration of his love for Juliet to intensify the mood threefold. Then Tybalt's speech was used to resurrect the hatred and conflict between the Capulet and Montague family, also to highlight the key them of hate. Finally Shakespeare added the kiss of Romeo and Juliet, to heighten the drama and passion but also to represent the other key theme, that of love. These two themes love and hate exist not only throughout the play but also throughout the world and time, that is why the play is so popular because billions can relate to love and hate. It has also inspired many films, books and plays after its time, for example the stage production of West Side Story and the song "Love Story" by Taylor Swift. Love and hate make Romeo and Juliet not just an exciting play but a relatable one too and Act 1 Scene 5 really enhances this due to the continued change in love and hate perspective. However, without the crucial conciliation at the Capulet Party, there would have never been "a story of more woe, than this of Juliet and her Romeo." ?? ?? ?? ?? Stephanie Knight 11JB-English Romeo and Juliet Essay ...read more.