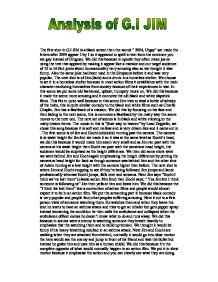 The first shot in G.I JIM is a black screen then the words " 2004, Urgay" we made the letters after 2004 appear 1 by 1 so it appeared to spell in text form the sentence you are gay instead of Uruguay. We did this because in spoofs they often make jokes using the text that appears by making it appear like a mistake and our target audience of 13 to 16 find jokes about homosexuality very amusing also so we thought it was funny. Also the same joke had been used in the Simpsons before it and was very popular. The next shot is of Jim (Jack) and a drunk in a homeless shelter. We choose to set it in a homeless shelter because in most action films it establishes with the main character excluding themselves from society because of their experiences in war. In this scene we put some old fashioned, upbeat, trumpety music on. We did this because it made the scene more amusing and it connotes the old black and white slapstick films. This fits in quite well because in this scene Jim tries to steal a bottle of whisky of the hobo, this is quite similar comedy to the black and white films such as Charlie Chaplin. Jim has a flashback of a mission. We did this by focusing on his face and then fading to the next scene, this is connotes a flashback by the misty way the scene moves to the next one. ...read more.

Then the next shot is off a bush then the enemy is thrown into it then a guitar and a tomato sauce bottle. We did this because the audience wouldn't expect him to win and when it cuts to the bush and a person is thrown into it followed by a guitar and a sauce bottle will surprise them. The next seen Hochi is dying and Jim walks over to him and tells him he wasn't actually grazed it was just some plum pie. Hochi then tell him that he is dying Jim does something stereotypical of a action film and refuses to believe him and shakes him violently, Hochi then says he knows who organised the assassination, Jim wanting to know who it was shakes him so violently he dies. He then rocks the corpse in mourning of Hochi death then the camera pans off to the sky. When Hochi told Jim he was dying with the shaking bit we exaggerated how much he would shake him to make a joke about these types of scenes. And normally just before they're about to die they try to tell the hero who was behind it even though they couldn't possibly know, at this point Jim shakes him so violently he dies, The main reason we did all of this in this scene was because we thought it would be ironic that Jim was so upset that he died when it was mostly his fault that he died. ...read more.

We put the camera behind Jack as he walked away so when the pikeys came they it emphasised how much they outnumbered Jack. The camera then moves so it's behind Jack, then he attacks them. We put the camera behind him when he attacked you could see what he was doing with anyone being in between him and the camera. The Pikeys then draw guns it then cuts to Jack were he bends down out of view then we stopped the camera then Jacked changed in Matrix style clothes (black sunglasses and a long leather jacket) we then made him bend down out of the camera view then come back into shot with the different clothes. We did this because in many spoofs and comedies the main character goes out of shot and appear again with something changed to them. We chose the leather jacket and the sunglasses because they connote the film the matrix. A song from the matrix sound track comes on and it goes into slow motion. The pikeys start firing at Jack who bends backwards to dodge them. We did this scene because it's a very famous scene and is used in all spoofs of the matrix. He then does various moves to kill the pikeys then goes to leave by flying but he cant so he takes the car but he's lost the keys so he walks. We did this because it bring the hero in the matrix who's got amazing powers, who then forgot how to fly and looses his car keys. ...read more.