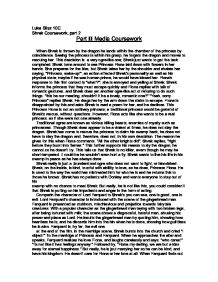 Luke Slisz 10C Shrek Coursework, part 2 Part II Media Coursework When Shrek is thrown by the dragon he lands within the chamber of the princess by coincidence. Seeing the princess is within his grasp, he forgets the dragon and moves to rescuing her. This descision is a very ogre-like one; Shrek just wants to get the task completed. Shrek turns around to see Princess Fiona laid down with flowers in her hands. She prepares for the kiss, but Shrek takes her by the shouldrs and shakes her saying, "Princess, wake-up!", an action effected Shrek's personality as well as his physical state; maybe if he was human prince, he would have kissed her. Fiona's response to this first contact is "what!?"; she is annoyed and yelling at Shrek. Shrek informs the princess that they must escape quickly and Fiona replies with talk of romantic gestures, and Shrek does yet another ogre-like act of refusing to do such things. ...read more.

The reason he gives for this when Fiona comments. "All the other knights did", Shrek replies, "right before they burst into flames." This further supports his reason to sly the dragon, he cannot so he doesn't try. This tells us that Shrek is no killer, evem though he may be short-tempered. It could be he wouldn't even hurt a fly. Shrek wants to live his life in his swamp in peace as he has always done. Shrek really is just a ,isunderstood ogre who does not want to fight, or bloodshed. Shrek, on the inside, is kind, trustful with abillity to love, as he does, Princess Fiona. He is used to the way the world has mistreated him for who he is and he returns this to those he knows. Shrek has no patients with Donkey and wants everyone to stay out of his swamp with no chance to meet Shrek. ...read more.

When he approaches the alter and speaks, Farquard realizes he love FIona, and laughs carelessly and says. "who cares!" "Its not like it has feelings anyway." Followed by, "Fiona my darling, we are but a kiss away for eternal happiness." But really, he is jsut marrying her so he can be kind, and have his kingdom. He doesn't care for Fiona or her love at all. When Farquard finds out she is an ogre, he remarks, "It's hideous!" And before Farquard's departure into the dragon's stomaach he holds a knief to her throat and belows to her "I'll have you locked-up for the rest of your days!" (Back in the tower she was rescued from). These actions of Farquard re-inforce his heartlessness, ruthlessness, marrying to be king and his disgrace, all caused, expressed and shown from his resent to Fiona's nightly form of being an ogre. On top of all this, for all he has done in those last minutes, it is shown that Lord Farquard is truely evil. ...read more.