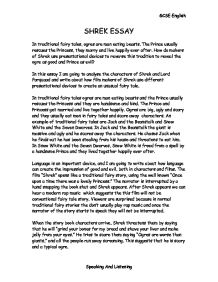 SHREK ESSAY In traditional fairy tales, ogres are man eating beasts. The Prince usually rescues the Princess, they marry and live happily ever after. How do makers of Shrek use presentational devices to reverse this tradition to reveal the ogre as good and Prince as evil? In this essay I am going to analyse the characters of Shrek and Lord Farquaad and write about how film makers of Shrek use different presentational devices to create an unusual fairy tale. In traditional fairy tales ogres are man eating beasts and the Prince usually rescues the Princess and they are handsome and kind. The Prince and Princess get married and live together happily. Ogres are big, ugly and scary and they usually eat men in fairy tales and scare away characters. An example of traditional fairy tales are Jack and the Beanstalk and Snow White and the Seven Dwarves. In Jack and the Beanstalk the giant is massive and ugly and he scares away the characters. He chases Jack when he finds out he has been stealing from his house and threatens to eat him. In Snow White and the Seven Dwarves, Snow White is freed from a spell by a handsome Prince and they lived together happily ever after. Language is an important device, and I am going to write about how language can create the impression of good and evil, both in characters and films. The film "Shrek" opens like a traditional fairy story, using the well known "Once upon a time there was a lovely Princess." The narrator is interrupted by a hand snapping the book shut and Shrek appears. ...read more.

There are four main types of angles or camera shots used in the film which are high angle shot, mid angle shot, low angle shot and close up shots. When Shrek tries to scare the story characters at the beginning of the film there is a close up of his mouth, this suggest that he is going to eat them up. This gives a tense moment for the viewers. The darkness causes further unease and pressure. Close up shots are used to focus the viewers attention on something. They are often used to focus attention on characters emotion. Close up shots are also used when Shrek and Fiona are smiling this gives an indication on the romance between them. They took close up shots so that we can focus on their emotions and the way they move. This way we can focus on every smile and detail on their faces. When Lord Farquaad is introduced to Princess Fiona the camera focuses on his hands instead of his face. This is done to make Lord Farquaad look hostile and unsympathetic. When Shrek visits Lord Farquaad's castle the camera moves from the ground level to show his tower, this is a high angle shot. It is useful because it makes Lord Farquaad seem dominant and wicked and make Shrek and Donkey seem vulnerable and pathetic. Low angle shots are effectively used because they show Lord Farquaad looking down on Shrek and his subjects. High angle shots are used when a character is made to seem more helpless and human type. This an important scene because in traditional fairytales this will be the other way round. ...read more.

Also they way he rescues Princess Fiona out of the castle was typically different from what ogres do in other traditional fairy tales , ogres don't rescue the Princess the Prince does. Ogres aren't suppose to find love in fairy tales their job is to eat men and scare away characters. In Shrek, Shrek finds love from the Princess and they got married at the end. In normal traditional fairy tales the Prince is the one who finds love from the Princess and they get married and live happily ever after. Although Lord Farquaad looks like a Lord, his actions suggest that he is evil. Throughout the film we saw that Lord Farquaad is cruel when we watched him torturing the gingerbread man he also steals Shrek's swamp. During the first scenes when Shrek went to reclaim his swamp he makes his knights fight Shrek which also suggest that he is a hard hearted Lord. He also rejects Princess Fiona because she turned into an ogre and falsely claims to be King. All of the above suggests that Lord Farquaad is different from conventional traditional Prince. The story of Shrek uses presentational devices to reverse our expectations so that by the end of the film the viewers feel that Shrek was an ogre who doesn't act like one. He feels that he can't hurt people when they haven't don anything wrong to him. His characteristics shows us that he is a kind ogre which is very unusual in normal traditional fairy tales. Also I have came to an conclusion that Lord Farquaad was different from normal traditional fairy tales Prince because he is cruel, arrogant and hard hearted. Perhaps the message of the story is that you cant judge a book by looking at its cover. ?? ?? ?? ?? GCSE English Speaking And Listening ...read more.