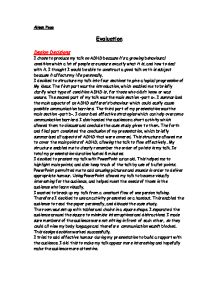 Chose to produce my talk on ADHD because it's a growing behavioural condition which a lot of people are unsure exactly what it is, and how to deal with it. I thought I would be able to construct a good talk

Alison Pegg Evaluation Design Decisions I chose to produce my talk on ADHD because it's a growing behavioural condition which a lot of people are unsure exactly what it is, and how to deal with it. I thought I would be able to construct a good talk on this subject because it affects my life personally. I decided to structure my talk into four sections to give a logical progression of My ideas. The first part was the introduction, which enabled me to briefly clarify what type of condition ADHD is, for those who didn't know or was unsure. The second part of my talk was the main section -part a-. I summarized the main aspects of an ADHD sufferer's behaviour which could easily cause possible communication barriers. The third part of my presentation was the main section -part b-. I described effective strategies which can help overcome communication barriers. I also handed the audience a short activity which allowed them to discuss and conclude the case study given to them. The forth and final part consisted the conclusion of my presentation, which briefly summarized all aspects of ADHD that were covered. This structure allowed me to cover the main points of ADHD, allowing the talk to flow effectively. ...read more.

On average the audience rated my plan and structure an 8.4 which is fairly good. By separating the audience around the room, minimised disruptions and prevented communication from being blocked. Throughout my presentation the audience stated that I used no inappropriate jargon or slang which I think created more of a professional atmosphere. By using grammatical skills, ambiguity was avoided. I clearly explained the terminology which enabled the audience to understand, learn and benefit from my talk. A member of the audience stated on their feedback that they "didn't know what ADHD was, and it really helped me as I want to be a teacher." I was pleased with the audience's response when I added jokes in my presentation, and placed funny pictures at the end of my PowerPoint presentation. The feedback indicated that I used fairly effective humour, which also built a rapport with the audience. I was surprised at how the audience rated the fluency of my talk. I felt that because of nerves, I was speaking a bit to fast which may have blocked what I was saying to the audience. This could have also caused the audience to miss key points in the talk. ...read more.

Most people in the audience didn't fully understand about the condition, attention deficit hyperactivity disorder beforehand. However due to fairly good communication skills, I achieved my aim which was to teach, and to raise awareness on how to 'effectively communicate with teenagers who suffer with ADHD. A respondent stated they have now "learnt what ADHD is and how to communicate with them." Possible Improvements I feel that during my talk I spoke too fast in parts, which could have caused the audience to switch off. If I could re-do my talk I would take into account what one respondent mentioned about "talking a bit slower" and try to apply the counsel. Hopefully this would improve my talk. Three people from the feedback questionnaire mentioned that I should add a few more pictures /images. One of those people specified that the pictures should be of people with ADHD being aggressive. If I got the chance to re-do the talk, I would have added a small video clip of a teenager with ADHD being abusive or aggressive, and then maybe discuss how to overcome that scenario through effective communication. Adding a short video clip would also meet the needs of one person who thought I should have looked at a few more people with ADHD. ...read more.