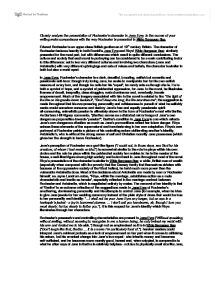 Closely analyse the presentation of Rochesters character in Jane Eyre. In the course of your writing make comparisons with the way Rochester is presented in Wide Sargasso Sea.

Closely analyse the presentation of Rochester's character in Jane Eyre. In the course of your writing make comparisons with the way Rochester is presented in Wide Sargasso Sea. Edward Rochester is an upper-class British gentlemen of 19th century Britain. The character of Rochester features heavily in both Bront�'s Jane Eyre and Rhys' Wide Sargasso Sea: similarly presented for the most part, but with differences which result in quite different conclusions. The culture and society that each novel is portraying can be considered to be a main contributing factor to this difference: set in two very different cultures and involving two characters (Jane and Antoinette) with very different upbringings and sets of values and beliefs, the character is similar in both but also a world apart. In Jane Eyre, Rochester's character is a dark, deceitful, brooding, selfish but romantic and passionate anti-hero: though truly loving Jane, he seeks to manipulate her for his own selfish reasons at every turn, and though he calls her his "equal", he rarely acts as though she is. He is both a symbol of hope, and a symbol of patriarchal oppression, for Jane. In the novel, he illustrates themes of deceit, inequality, class struggles, male dominance and, eventually, female empowerment. ...read more.

it is a name I'm particularly fond of."): harsher readers could interpret Jane's minimal protests as a lack of empowerment on her part when it comes to criticising his nature, but his eventual change into Jane's true equal - she inherits money and becomes self-sufficient, and he becomes more morally good, honest and, when crippled, is comparable to what he often says of Jane in that he is relatively helpless - not due to physically small size like Jane, but physical incapability. Up until the end of the novel, Jane Eyre, Rochester is a character who often feels sorry for his own plight ("Compare ... this form with that bulk; then judge me, priest of the gospel and man of the law, and remember with what judgement ye judge ye shall be judged!"), and this is also reflected in Wide Sargasso Sea ("my lunatic"). Through and because of Jane, he experiences more hardships than simply not getting what he wants, eventually seeing 'the error of his ways'. Another theme illustrated by the character of Rochester in Jane Eyre is that of morality and religion: the ultimate triumph in the novel is that of morality and Jane's purity, even going so far as to redeem Rochester himself through a true 'baptism of fire'. ...read more.

He (unsuccessfully) tries to receive praise regarding his looks, as the character of the Beast does. Rochester's presentation as a wild beast is mostly consistent in that he is described throughout as being, although cultured and well-travelled, quite unconventional and less "tamed" than those in his social circle: and there is a clear indication that Jane must "tame" him or suffer hurt herself. In contrast, Wide Sargasso Sea's Mr. Rochester is wholly untamed by Antoinette; when she tries to make him love her through magic (which, even in Jane Eyre, is not enough to prevent his immorality: Rochester wishes to marry Jane because he loves her, despite knowing that he will be going against her principles by forcing her to commit bigamy); it does not work, and he believes he has been poisoned. Although similar and comparable, the characters of Bront�'s Rochester and Rhys's Rochester are placed in different cultures, written in different centuries and have different circumstances. Rhys's villain is not given the fond treatment that Bront�'s Byronic hero is at the end; however, the presentation of both characters is consistent in many areas. Rochester, despite redeeming himself at the conclusion of the novel, is a symbol of the male oppression, of the patriarchal society and of the lies and deceit which bring about Antoinette's imprisonment and almost bring about Jane's. ...read more.