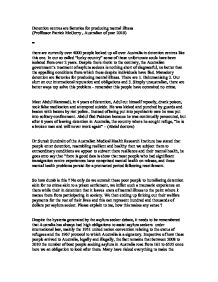 Detention centres are factories for producing mental illness (Proffessor Patrick McGorry , Australian of year 2010) = there are currently over 4000 people locked up all over Australia in detention centres like this one. In our so called "lucky country" some of these unfortunate souls have been isolated from over 2 years. Despite there rhotic to the contrary, the Australian government's treatment of asylum seekers is nothing short of disgraceful, no better than the appalling conditions from which these despite individuals have fled. Manadory detention are factories for producing mental illness. There are 1. Dehumanising 2. Our slurr on our international reputation and obligations and 3. Simply unaustralian, there are better ways top solve this problem - remember this people have commited no crime. Meet Abdul Hammadi, in 4 years of detention, Adul cut himself repeatly, drank poison, took false medication and attempted suicide. He was kicked and punched by guards and beaten with batons by riot police.. Instead of being put into psychiatric care he was put into solitary confinement. ...read more.

Please explain to me, how this makes any sense ? Despite the hysteria generated by the asylum seeker debate, it needs to be remembered that Australia has always had high obligations to assist asylum seekers under international law, mainly the 1951 united nation convention relating to the status of refugees and the 1967 protocol to which Australia is a signatory. Inspective of how these people arrived to Australia, legally and illegally, the fact remains that between 2008 to 2010 the number of boat people seeking asylum in Australia rose from 161 to 6535 once here we an obligation to look after them. Many have risked everything to make the dangerous journey. Some have left families, some have been displaced and others have others tremendous torture. While they have committed no crime, it is a crime of the nation which locks people up in mandatory detention and inflicts another round of mental anguish in amongst an insurmountable beurocacy of legalism and red tape. As a recent documentary on 4 corners revealed, mandatory detention is a blight on our nation. ...read more.

There is plenty of internet support about this topic. Join or find an organisation like Amnesty international are raising funds for there project freedom from fences which aims to A) get access or interview asylum seekers in remote detention centres, so that there stories can be told, B) support research and help with the protective applications of individual asylum seekers, C) monitor and support peoples claims if they have been treated unfairly and D) Lobby the government to abandon the barbaric practice of mandatory detention. Conclusion: As fair minded Australians I am sure you will agree that detention centres don't work and in fact they are responsible for causing more trauma and mental illness. Finally as an Australian, you must agree with our nation logo on which we are prided upon that is to give to everyone a fair go. Therefore we must also give these despite people a fair go also, it is time to shut down detention centres forever and lets look for more human ways of processing their refuge status. Whatever your political agenda or colour it is incumbent on us to give asylum seekers a fair go and the right to heard in a civilised and compassionate manner. ...read more.