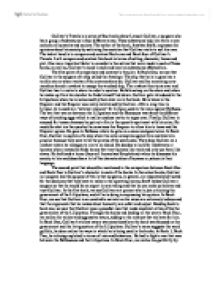 Gulliver's Travels is a series of four books about Lemuel Gulliver, a surgeon who has a group of adventures in four different areas.

Gulliver's Travels is a series of four books about Lemuel Gulliver, a surgeon who has a group of adventures in four different areas. These adventures help him form a new outlook on humanity and society. The author of the book, Jonathan Swift, expresses his opinions about his society by satirizing the societies that Gulliver visits to suit his own. The task at hand is to compare and contrast Book one and Book four of Gulliver's Travels. I will compare and contrast this book in terms of setting, character, theme and plot. One more important factor to consider is the satires that were made in each of these books; as well as, Gulliver's mood in each and how his adventures affected him. The first point of comparison and contrast is the plot. In Book One, we see that Gulliver is the surgeon of a ship called the Antelope. The ship that he is in goes into a terrible storm where twelve of the crewmembers die. Gulliver and the remaining crew members board a rowboat to escape the wrecked ship. ...read more.

They drop Gulliver on a rowboat where he manages to row to an island. He decides to look for inhabitants or humans where instead he finds horses that treat humans like trash and only use them like slaves. He befriends a horse (they call themselves Houyhnhms) where he discusses his society to him and describes a lot of the characteristics of humans or yahoos in their language. The second point that should be mentioned in the comparison between Book One and Book Four is Gulliver's character in each of the books. In the actual books, Gulliver is a surgeon and the purpose of this is that surgeons, in general, are respected and trusted for the decisions that they have to make in the operating rooms; Swift makes Gulliver a surgeon so that he would be an expert in note taking and that he can make us believe and trust Gulliver. In the first book, we see Gulliver as a person who is just criticizing the government of the Lilliputians, and all he is doing is expressing his opinion. ...read more.

The last element in the character of Gulliver is the misanthropy that he develops at the end of the book. The cause of this misanthropy is view at the Yahoos in the island of the Houyhnhms. He couldn't stand Yahoos, even his own family, that he bought himself a horse and talked to him at the very end, "As soon as I entered the house, my wife took me in her arms, and kissed me, at which, having not been used to the touch of that odious animal.". The term odious that he describes his wife with shows how much he could not stand his own wife which is quite depressing really. He really wanted to stay with the Houyhnhms at the island. This contradicts the part in the first book where he wondered if he would ever see his family again and his children. Gulliver's character was deeply altered through his travels, but mainly altered in the final book where he developed his misanthropy and the hate of the humans of the world, at the very end, he bought himself a horse that he talked to instead of his family and the friends that he might have had. ...read more.