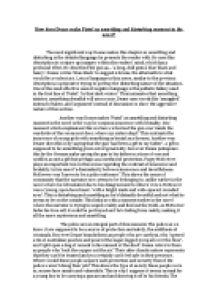 How Seamus Deane makes 'Pistol' an unsettling and disturbing moment in the novel: 'Reading in the Dark'

﻿How does Deane make Pistol an unsettling and disturbing moment in the novel? The most significant way Deane makes this chapter so unsettling and disturbing is the detailed language he presents the reader with. He uses this description to conjure up imagery within the readers? mind, which has a profound effect. He described the gun as? ?a long, chill pistol, blue-black and heavy?. Deane writes ?blue-black? to suggest a bruise, the aftermath to what would be a violent act. Lots of language in this scene, similar to the previous description, is pejorative trying to portray the disturbing nature of the situation. One of the most effective uses of negative language is the pathetic fallacy used in the first line of ?Pistol?, ?In that dark winter?. This insinuates that something sinister, something dreadful will soon occur. Deane uses words like ?smuggled? instead of taken, and ?argument? instead of discussion to show the aggressive nature of this section. ...read more.

McKeever was a ?young, open-faced man?, ?with a bright smile and wide-spaced, rounded eyes?. This is disturbing and unsettling as he?s blatantly deceitful and not what he seems to be on the outside. This links in with a moment earlier in the novel where the narrator is trying to unpick reality and find out the truth. As McKeever hides his true self, it could be portrayed as if he?s hiding from reality, making it all the more mysterious and unsettling. The police are an integral part of this moment. The police as we know it are supposed to be a source of protection and safety, the antithesis of criminals. However Deane brands them as people who are careless, who ?opened a tin of Australian peaches and poured the sugar-logged syrup all over the floor?, and ?split open a bag of cement in his ransack of the shed?. Deane refers to them as people who ?took the oxygen out the air?. ...read more.

This is shown clearly when Deane says ?Everybody had sweat or tears on their faces?. There is an apparent juxtaposition between the sweat, due to the nerve-racking fear and the tears, due to the weakness and powerlessness of the family showed. Another way that Deane made the police so disturbing is the fact that they had no mercy, ?they beat him?but they didn?t believe him?so they beat us too, Liam and me, across the table from him?. ?Him? refers to their father who had to watch his own children being beaten up. These sweat and tears from before had now turned into ?sweat and rage?, which illustrates his anger towards the police. The way the reader can tell that police induced fear into the narrator is that it had a prolonged effect on him. ?If a light flickered from the street beyond, the image of the police car would reappear and my hair would feel starched and my hands sweaty?. It seriously affected his life and the way he would act later on in the novel. ...read more.