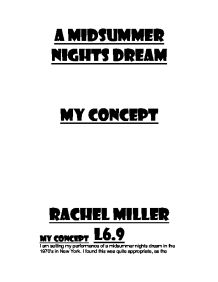 I am setting my performance of a midsummer nights dream in the 1970's in New York.

A Midsummer Nights dream My concept Rachel miller l6.9 My concept I am setting my performance of a midsummer nights dream in the 1970's in New York. I found this was quite appropriate, as the characters in the play would fit the types of people around at the time. I have set my performance around the theme of gangsters and the mafia, which will be the equivalent of the courts. The fairy world will be presented in the form of a strip club with the fairies becoming prostitutes and strippers. Titania will be the lead stripper/pole dancer with Oberon the club owner and puck the pimp who is also a drug dealer and distributor. The mechanicals will be a group of unemployed men trying to make a living out of stripping. My focus My focus or themes for my interpretation of a Midsummer Nights Dream will be: STATUS/POWER This will be shown through the gangsters and how the males have more power over the females and between Titania and Oberon and how Titania is trying to gain a higher status than Oberon but feels she cant while she is a stripper. ...read more.

I will fly props and set on and off from above the stage in order to alter parts of the set. The set will be quite bright to give colour as most characters are wearing black costumes. COSTUME Each costume must be in keeping with the characters personality but also reflect the time period and style of the piece. The courts/Gangsters This is a representation of Theseus' costume and is quite stereotypical of a gangster. The gun is an important part of the costume and helps maintain his high status. This is a representation She is s****l in an understated of Hippolyta's costume. way and so has a certain power. The remainder of the courts will be dressed in a similar way with men in suits and the women in dresses. The Fairies/Prostitutes and Strippers This is my representation of Titania with long flowing blonde hair and portrayed in a very s****l nature. The black helps to convey the evil powerful side to the fairies and how they manipulate the play. Although in my interpretation of a midsummer nights dream the fairies are not real they still represent the idea of fairies and their mystical spirituality. ...read more.

The remainder of the mechanicals would be dressed in jeans trousers and t-shirts when not performing. As strippers they would wear pink hot pants to add extra comedy and not expose too much flesh. Lighting and sound Lighting and sound are particularly important as the play is set in a club and there are always actors and dancers present on the main part of the stage. The lighting needs to be bright and reflect the clubs strip theme. Reds, pinks, blues and oranges would work best and would symbolise the love and mystery element. In the gangsters part of the stage there will be normal lights with no coloured gels to show the separation between the worlds. When the scenes in the club are taking place there will always be very soft music playing in order to gain the correct atmosphere for a strip club i.e. Marvin Gaye and other such soul artists. When the couples dance I would have a track like the mamas and papas dancin' in the street, which was sometimes played in strip clubs in the 70's. These types of dances would be specially choreographed and would include the strippers teasing the male strippers and crossing into their "world" or space. ...read more.