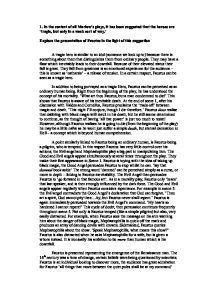 In the context of all Marlow's plays, it has been suggested that the heroes are 'tragic, but only in a weak sort of way.' Explore the presentation of Faustus in the light of this suggestion.

1. In the context of all Marlow's plays, it has been suggested that the heroes are 'tragic, but only in a weak sort of way.' Explore the presentation of Faustus in the light of this suggestion A tragic hero is similar to an idol (someone we look up to) because there is something about them that distinguishes them from ordinary people. They may have a flaw which inevitably leads to their downfall. Because of their elevated status their fall is great. They fall from greatness is an emotional experience for the audience - this is known as 'catharsis' - a release of tension. In a certain respect, Faustus can be seen as a tragic hero. In addition to being portrayed as a tragic Hero, Faustus can be perceived as an ordinary human being. Right from the beginning of the play, he has understood the concept of his mortality. ...read more.

The Good and Evil angels appear simultaneously several times throughout the play. They make their first appearance in Scene 1. Faustus is toying with the idea of taking up black magic, the Good Angel persuades Faustus to stop whilst he can. 'lay that damned book aside' The strong word 'damned' can be perceived simply as a curse, or more in depth - linking to Faustus inevitability. The Evil Angel then persuades Faustus to 'go forward in that famous art'. As in a morality play, Faustus only 'hears' that last speaker, and is then strongly influenced by the dark force. The Good and Evil angels appear regularly when Faustus considers repentance. For example in scene 5: the Evil angel contradicts the Good Angel's declaration that God can forgive. 'Thou art a spirit, God cannot pity thee...Ay, but Faustus never shall repent.' Faustus is again immediately persuaded towards the Evil Angel's command. ...read more.

Faustus can also be portrayed as a hedonistic villain. In other words, he is living for pleasure. This is made apparent in comic scenes such as scene 7 (the scene in which he is invisible and steals the popes food, then punches him) and scene 10 (the hours-courser scene). Faustus wastes 24 years on petit tricks, like these, and doesn't actually accomplish anything even near to the announcements he was making in scene 1. Faustus seems to have descended from being an intellectual, well-respected scholar to a disgraceful villain taking pleasure in the misfortune of others. In a certain respect, Faustus can be portrayed as a tragic hero, as the audience does look up to him. However, as Faustus slowly progressed from an elevated position in society to a desperate, self-centred villain throughout the play and the fact that his mortality was inevitable meant that his actual downfall did not seem as great, like a typical tragic hero. ...read more.