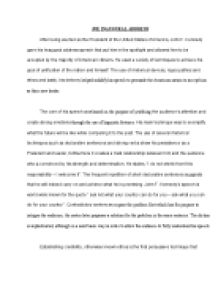 ﻿JFK INAUGURAL ADDRESS After being elected as the President of the United States of America, John F. Kennedy gave his Inaugural address speech that put him in the spotlight and allowed him to be accepted by the majority of American citizens. He used a variety of techniques to achieve his goal of unification of the nation and himself. The use of rhetorical devices, logos pathos and ethos and lastly, his delivery helped solidify his speech to persuade the American nation to accept him as their new leader. The core of his speech was based on the purpose of grabbing the audience?s attention and create strong emotions through the use of linguistic features. His main technique was to exemplify what the future will be like while comparing it to the past. The use of several rhetorical techniques such as declarative sentences and strong verbs show his persistence as a President and leader, furthermore it creates a trust relationship between him and the audience who is convinced by his strength and determination. He states, ?I do not shrink from this responsibility ? I welcome it?. ...read more.

Lastly, in order to build his ethos, Kennedy promises the world that he will do everything possible in order to maximize and guarantee freedom for every nation. Kennedy also uses pathos to create an emotional appeal to his speech as well as to himself. By stating that our hands have the ability and the power of destruction but can also solve problems, he plants a seed in the audiences mind making them believe that, they, decide of the future of their country. Being elected after World War II, he relies on the nation?s fear of the atomic weapon to convince them that he will protect them from war. He, will protect them from ?the dark powers of destruction unleashed by science?. The use of this technique is very effective to involve his audience emotionally and push them to action, to vote for him. The public is convinced that the new President will serve their best interest to avoid further damage because of the mass destructive war weapon. Kennedy builds his logos throughout the speech mainly by repetition of his desire to set nations free and unite these free nations to prevent the spread of communism. ...read more.

His voice gets louder and his body more opened up when he mentions himself and how he is going to help the United States of America and he will be a responsible and faithful President. This indicates his confidence and will power, he is willing to give ?everything he has? to be accepted and followed. For instance, when he mentions different groups of people such as ?those new states?, ?those people in the huts and villages?, he makes eye contact and creates a feeling of acknowledgement for the audience. Overall, Kennedy presented a powerful speech that caught the nation?s attention and incited them to offer their trust to President Kennedy, in return of a peaceful and successful society. The use of rhetorical devices such as the linguistic features that include anaphora, repetition, metaphors, use of pronouns to involve the citizens and unite them, helped build a stronger speech. Although, the strength is mostly accomplished by the use of ethos, logos and pathos that are made up of the rhetorical techniques. By delivering a logic, emotionally appealing and credible speech in a determined and confident manner, John Fitzgerald Kennedy obtained the approval of seventy five percent of Americans. ...read more.