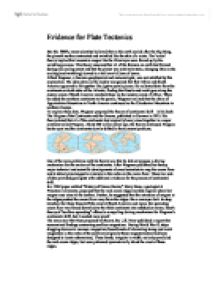 Evidence for Plate Tectonics Into the 1900's, many scientists believed that as the earth cooled after the Big Bang, the planet's surface contracted and wrinkled like the skin of a raisin. The 'raisin' theory implied that mountain ranges like the Himalayas were forced up by the wrinkling process. This theory assumed that all of the features on earth had formed during one cooling event and that the planet was relatively static, changing little as the cooling (and wrinkling) slowed to a halt over billions of years. Alfred Wegener, a German geophysicist and meteorologist, was not satisfied by this explanation. His ideas drew on the widely recognized fact that Africa and South America appeared to fit together like jigsaw puzzle pieces. He collected data from the continents on both sides of the Atlantic, finding that fossils and rock types along the eastern coast of South America matched those on the western coast of Africa. ...read more.

The same year that Hess proposed his theory, the U.S. Navy published a report that summarized findings concerning seafloor magnetism. During World War II, ships dragging devices to measure magnetism found bands of alternating strong and weak magnetism in the rocks of the seafloor (originally these magnetometers had been designed to locate submarines). These bands, irregular in width, not only paralleled the mid-ocean ridges, but were patterned symmetrically about the crest of these ridges. The magnetism was caused by the presence of magnetic minerals in the rocks. Scientists were not surprised to learn that seafloor rocks contain the magnetic mineral magnetite. In 1963, Fred Vine and Drummond Matthews, two British geologists, joined the map of the Mid-Atlantic Ridge with the symmetric bands of magnetism on the seafloor. Where the Navy ships mapped strong magnetism, rocks showed normal polarity; where they mapped bands of weak magnetism, the rocks showed reversed polarity. These strongly patterned paleomagnetic reversals recorded on the seafloor provided the necessary proof of Hess's seafloor spreading. ...read more.

3. There is a large amount of seismic, volcanic, and geothermal activity along the conjectured plate boundaries. This is shown clearly below in the figure labelled "Crustal plate boundaries" where the epicentres of earthquakes above Richter magnitude 5.0 are plotted for a 10-year period. The concentration is striking, and indeed this plot serves to define the plate boundaries extremely well. 4. There are ridges, such as the Mid-Atlantic Ridge where plates are separating that are produced by lava welling up from between the plates as they pull apart. Likewise, there are mountain ranges being formed where plates are pushing against each other (e.g., the Himalayas, which are still growing). "Crustal plate boundaries" Today, much of the evidence the plate tectonics is acquired with satellite technology. Through use of the Global Positioning System (GPS) and other satellite-based data collection techniques, scientists can directly measure the movement and speed of plates on the surface of the earth. Speeds range from 10-100 mm per year, confirming the long-held belief that plates move at a slow but constant rate. ...read more.