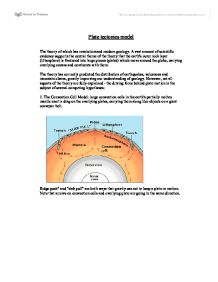 Plate tectonics model The theory of which has revolutionized modern geology. A vast amount of scientific evidence supports the central theme of the theory that the earth's outer rock layer (lithosphere) is fractured into large pieces (plates) which move around the globe, carrying overlying oceans and continents with them. The theory has correctly predicted the distribution of earthquakes, volcanoes and mountain chains, greatly improving our understanding of geology. However, not all aspects of the theory are fully explained - the driving force behind plate motion is the subject of several competing hypotheses: 1. The Convection Cell Model: large convection cells in the earth's partially molten mantle exert a drag on the overlying plates, carrying them along like objects on a giant conveyor belt. Ridge push" and "slab pull" are both ways that gravity can act to keep a plate in motion. Note that arrows on convection cells and overlying plate are going in the same direction. 2. The Push-Pull Model: the creation of new oceanic plate at spreading centers pushes the plates away on either side and, at the same time, colder, denser plate material sinks at subduction zones pulling the plates along behind them. The electromagnetic field applies both pushes and pulls to bodies in the field. This is accomplished via photons and photon "holes" in the field traveling both forward and backward-in-time respectively. ...read more.

Convergent boundaries The size of the Earth has not changed significantly during the past 600 million years, and very likely not since shortly after its formation 4.6 billion years ago. The Earth's unchanging size implies that the crust must be destroyed at about the same rate as it is being created, as Harry Hess surmised. Such destruction (recycling) of crust takes place along convergent boundaries where plates are moving toward each other, and sometimes one plate sinks (is subducted) under another. The location where sinking of a plate occurs is called a subduction zone. The type of convergence, called by some a very slow "collision", that takes place between plates depends on the kind of lithosphere involved. Convergence can occur between an oceanic and a largely continental plate, or between two largely oceanic plates, or between two largely continental plates. Oceanic-continental convergence If by magic we could pull a plug and drain the Pacific Ocean, we would see a most amazing sight -- a number of long narrow, curving trenches thousands of kilometers long and 8 to 10 km deep cutting into the ocean floor. Trenches are the deepest parts of the ocean floor and are created by subduction. Off the coast of South America along the Peru-Chile trench, the oceanic Nazca Plate is pushing into and being subducted under the continental part of the South American Plate. ...read more.

Tuzo Wilson, who proposed that these large faults or fracture zones connect two spreading centers (divergent plate boundaries) or, less commonly, trenches (convergent plate boundaries). Most transform faults are found on the ocean floor. They commonly offset the active spreading ridges, producing zig-zag plate margins, and are generally defined by shallow earthquakes. However, a few occur on land, for example the San Andreas fault zone in California. This transform fault connects the East Pacific Rise, a divergent boundary to the south, with the South Gorda -- Juan de Fuca -- Explorer Ridge, another divergent boundary to the north. The Blanco, Mendocino, Murray, and Molokai fracture zones are some of the many fracture zones (transform faults) that scar the ocean floor and offset ridges (see text). The San Andreas is one of the few transform faults exposed on land. The San Andreas fault zone, which is about 1,300 km long and in places tens of kilometers wide, slices through two thirds of the length of California. Along it, the Pacific Plate has been grinding horizontally past the North American Plate for 10 million years, at an average rate of about 5 cm/yr. Land on the west side of the fault zone (on the Pacific Plate) is moving in a northwesterly direction relative to the land on the east side of the fault zone (on the North American Plate). Aerial view of the San Andreas fault slicing through the Carrizo Plain in the Temblor Range east of the city of San Luis Obispo. ...read more.