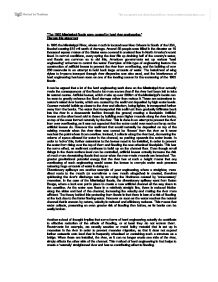 "The 1993 Mississippi floods were caused by hard river engineering." Discuss this statement In 1993 the Mississippi River, whose mouth is located near New Orleans in South of the USA, flooded causing $15 mil worth of damage. Around 50 people were killed in the disaster as 18 thousand square metres of the States were covered in overland flow in North America's worst flood. In normal conditions, every spring the river fills up draining half of the country's water, and floods are common so to aid this, American governments set up various 'hard engineering' schemes to control the water. Examples of this type of engineering feature the construction of artificial levees to prevent the river from overflowing, and the building of over 200 reservoirs in an attempt to hold back large amounts of water. The instalment of wing dykes to improve transport through river dispersion was also used, and the interference of hard engineering has been seen as one of the leading causes for the worsening of the 1993 floods . It can be argued that a lot of the hard engineering work done on the Mississippi river actually made the consequences of the flood a lot more severe than if the river had been left to take its natural course. ...read more.

is created, therefore quickening the river's discharge rate by removing the hindrance caused by 'unnecessary' meanders. In the case of the Mississippi floods, the diversionary spillway went from Baton Rouge, where a lock was put in place to create a new artificial channel all the way down to the coastline. As the water now flows in a relatively straight line, there is reduced friction along the sides and bed of the channel, increasing the velocity and making the river more efficient. The theory behind this protecting from floods is that there is less of a risk of flooding at the lock due to the faster flowing water. However as soon as the water reaches the natural channel that is uneven by nature, velocity is reduced and efficiency reduces. This means that water collects, presenting an even greater risk of flooding than before, as its banks can be easily broken. Another school of thought implies that some forms of hard engineering actually do contribute to effective reduction of the effects of flooding, or at least they do not worsen them. Revetments for example, are usually wooden or metal bulky material that is set up in meanders in the river in order to prevent meander migration, so that it does not expand further outwards onto land that is frequently urbanised or containing such a structure as a bridge. ...read more.

In conclusion it can be said that yes, some forms of hard engineering have exacerbated floods due to poor planning for river response. Diversionary spillways create a very fast flow of water that is unnatural and therefore disrupts the river when the water rejoins the natural channel. Similarly, artificial levees mean that minor natural floods are not permitted in order for sediment to pile up around the banks, so it builds up at the bed of the river, reducing space in the channel, and therefore encouraging spill over. On the other hand, it can be said that floods are not always the result of hard engineering due to the presence of evidence to suggest that some forms of hard engineering have little effect, and sometimes even a positive one on the floods in comparison. Other contributing factors have been said to have exacerbated the floods as much as some forms of hard engineering, such as the presence of urbanisation in the river's floodplain, and the lack of any accurate or existing records of other serious floods allowing less scope for predictions and therefore decent planning. Therefore it should be said that hard engineering in some cases has been known to create bigger flooding problems, however it is not solely to blame for the Mississippi 1993 floods, as the presence of other human intervention can be seen to have also exacerbated the effects of flooding. ...read more.