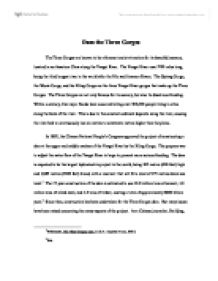 Dam the Three Gorges The Three Gorges are known to be a famous tourist attraction for its beautiful scenery, located in northeastern China along the Yangzi River. The Yangzi River runs 3700 miles long, being the third longest river in the world after the Nile and Amazon Rivers. The Qutang Gorge, the Wuxia Gorge, and the Xiling Gorge are the three Yangzi River gorges that make up the Three Gorges. The Three Gorges are not only famous for its scenery, but also its disastrous flooding. Within a century, five major floods have occurred killing over 300,000 people living in cities along the bank of the river. This is due to the constant sediment deposits along the river, causing the river bed to continuously rise six metres to seventeen metres higher than the plains. In 1992, the Chinese National People's Congress approved the project of constructing a dam at the upper and middle reaches of the Yangzi River by the Xiling Gorge. The purpose was to adjust the water flow of the Yangzi River in hope to prevent more serious flooding. The dam is expected to be the largest hydroelectric project in the world, being 185 metres (606 feet) high and 1,983 metres (6500 feet) ...read more.

An argument to this is that the dam will not only generate hydroelectric power to it's surrounding regions, but also prevent flooding. The dam will tame the river's current, which reduces the chances of flooding to 1:1,000 each year. In the 1998 flood, 1,562 people were drowned and 197,000 ha of farmland were inundated. The total loss of this flood amounted to $200 billion yuan. By preventing more floods, the government is in turn saving more money by reducing costs that would go towards rebuilding flooded cities or towns. With less floods occurring, the Yangzi scenery can be left in peace. The public has been reassured that the dam will not alter any tourist's appreciation towards the fine Yangzi scenery. Dealing With the People The main purpose of the dam, as we know, is to reduce the threat of flooding. But in order to create the reservoir, the upper reaches of the Yangzi River will have to be purposely flooded to maximize the height of the dam. "13 cities, 140 towns, 1,352 villages, 657 factories, 30,000 hectares of cultivated land"6 and many important historical sites will disappear under the reservoir's water. Analysts are afraid that after reaching the 22.5 billion cubic metre flood control capacity, "there will be nothing to prevent over spill from invading the exposed lower valley."7 Another factor ...read more.