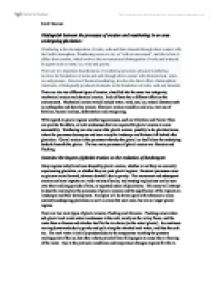 To what extent are fluvio-glacial deposits and landforms distinctive?

Distinguish between the processes of erosion and weathering in an area undergoing glaciation: Weathering is the decomposition of rocks, soils and their minerals through direct contact with the Earth's atmosphere. Weathering occurs in situ, or "with no movement", and this is how it differs from erosion, which involves the movement and disintegration of rocks and minerals by agents such as water, ice, wind and gravity. There are two important classifications of weathering processes; physical weathering involves the breakdown of rocks and soils through direct contact with elements heat, water, ice and pressure. However Chemical weathering, involves the direct effect of atmospheric chemicals, or biologically produced chemicals, in the breakdown of rocks, soils and minerals. There are also two different types of erosion, classified into the same two categories; mechanical erosion and chemical erosion. Each of these has a different effect on the environment. Mechanical erosion would include water, wind, sun, ice, natural disasters such as earthquakes and shoreline erosion. Chemical erosion would be acid rain, over use of fertilizer, human land use, deforestation and overgrazing. With regards to glacial regions weathering processes, such as Dilatation and Freeze-Thaw can provide the debris, or rock weaknesses that are required for glacial erosion to occur successfully. Weathering can also occur after glacial erosion, possibly in de-glaciated areas, where the processes decompose and wear away the landscape and features left behind after glaciation. Glacial erosion is the processes whereby the glacial ice itself alters the underlying bedrock beneath the glacier. The two main processes of glacial erosion are Abrasion and Plucking. Examine the impact of glacial erosion on the evolution of landscapes: Many regions today have been shaped by glacial erosion, whether or not they are currently experiencing glaciation, or whether they are post-glacial regions. ...read more.

Another way in which varying rates of erosion can create features is when there are previous Igneous Intrusions that protrude upwards into the glaciers path. This can be seen in Grand Teton Nation Park in Wyoming USA where the resistant igneous intrusions cause the glacier to move over the obstructions. The ice is stretched moving over the first; extended flow, and then compressed moving between the two, where downward pressure is placed on the normal bedrock between, which as a result is over deepened, creating hollows. In Grand Teton National Park this has allowed the Jackson and Jenny Lakes to form. Cirque, or Corrie glaciers are another feature created from glacial erosion. These are the result of previous small feeder glaciers and can give rise to many other features that occur between and around the cirque glacier. Corries are armchair shaped hollows found on North-facing slopes. They have very steep back walls and a scoured out over deepened basin, a lip on the front rock or moraine. They are always wider and longer than they are tall, and are usually only 100s of metre long but can be longer; the Cirque de Gavarnie in the French Alps is 2 kilometres long. The corrie feature formed just off the Hauslabjoch glacier in the Otztaler Alps in Germany was formed as a result of accumulation of snow over many years, which was then compacted, forming nevee and then ice. At a critical mass, movement occurred in a rotational manner, subjecting the back wall to plucking and the basin to over deepening via abrasion. A crevasse can form at the back of the glacier, known as a Bergschrund, which is the deepest and largest crevasse formed when the rest of the glacier moves downwards due to gravity ...read more.

Arguably the largest influence, on a wide scale, on changes in glacial regions, and thus the impacts of glacial erosion, is global climate change. On the one hand, in areas of high latitude, this process is having a negative effect on glaciation, and causing increases in temperatures, and overall glacial retreat. The Bering glacial complex which dominates Alaska has thinned by 100s of meters over the past century, and since 1900 the terminus of the main glacial channel has retreated over 12km. Across the Greenland Ice Sheet in Antarctica, huge changes can be seen, causing concern across the world. Icebergs breaking off from the ice cap can be seen in huge numbers, with breakage occurring daily, at Cape York off Greenland. In the region, the area that is experiencing melting has increased 16% since 1979, and shrinkage is projected to increase in the future. A rate of melting of 239km3/year has been recorded by the US Space Station. This melting in Polar Regions in predicted to severely affect the ocean current circulation, especially in the northern Atlantic, where the Gulf Stream provides a regulator on the climate of the UK and northern Europe, keeping the climate moderate. There is concern surrounding the vast amounts of colder, fresh water being added to the ocean due to ice melting, and predictions that this could shut down the Gulf Stream, give rise to theories that this could cause the climate in the UK to become much colder, and for it to be possible for another glacial period. This would cause glacial erosion in the UK uplands to resume and change the landscape again, showing that the impacts of glacial erosion are never stagnant, and the appearance of glacial landscapes is susceptible to change at any time, potentially even in post-glacial regions. ?? ?? ?? ?? Sarah Bewers ...read more.