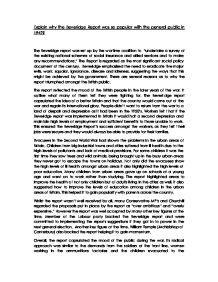 Explain why the Beveridge Report was so popular with the general public in 1942?

Explain why the Beveridge Report was so popular with the general public in 1942? The Beveridge report was set up by the wartime coalition to "undertake a survey of the existing national schemes of social insurance and allied services and to make any recommendations." The Report is regarded as the most significant social policy document of the century. Beveridge emphasised the need to eradicate five major evils, want, squalor, ignorance, disease and idleness, suggesting the ways that this might be achieved by the government. There are several reasons as to why the report triumphed amongst the British public. The report reflected the mood of the British people in the later years of the war, it outline what many of them felt they were fighting for. The Beveridge report capsulated the idea of a better Britain and that the country would come out of the war and regain its international glory. People didn't want to return from the war to a land of despair and depression as it had been in the 1930's. Workers felt that if the Beveridge report was implemented in Britain it would halt a second depression and maintain high levels of employment and sufficient benefits to those unable to work. This ensured the Beveridge Report's success amongst the workers, as they felt their jobs were secure and they would always be able to provide for their families. ...read more.

Doctors and hospital bills could be a heavy burden for many people on lower incomes. This led too many Mothers neglecting their own health so that they could ensure their children were healthy and could afford any treatment if ever required. This is one of the main issues that the NHS would try to put right, it was originally planned to provide people of all ages and backgrounds with free medical care when they needed it. However, when it came to implementing the plans for the NHS it was a long and difficult process. By 1951 there was a noticeable difference in the increase of standards of healthcare within children across Britain due to the NHS's free checkups and medical advice. However, the introduction of prescription charges in 1951 was a noticeable downside to the previous success of the NHS. The NHS had been far more expensive than the government had ever planned and to ensure its continual support charges had to be implemented to those who were less vulnerable. There was also a lot of initial opposition from members of the Conservative party and practising doctors. Doctors before had been part of a private health care scheme, this meant they could work the hours they chose and charge as much or as little as they wanted. ...read more.

Another problem was that the majority of the houses built by the Labour government during this period were mainly prefab houses and were not built to last. So where as the houses may have been suitable for the time they wouldn't last for a long period of time and as a result the issue of housing would arise again in the future. So were as the Labour government did attempt to tackle the issue of poor housing in Britain it wasn't to a great enough extent to completely combat the issue of squalor as identified by the Beveridge report. Overall, the Labour government were marginally successful in implementing the proposals of the Beveridge report. Whilst they attempted to put in place many reforms to tackle the five giants mentioned they were not carried out to a great enough degree. For example, the NHS was successful in tackling disease in Britain but the fact that it later had to return to a contributory scheme by paying for your own prescriptions meant that it wasn't a complete success as some people still would be unable to pay for the treatment they would need. More needed to be done by the government to ensure the success of all policies they put in place and perhaps they would have been better to implement them gradually as the economy recovered after the Second World War. ?? ?? ?? ?? ...read more.